Inmate turns out to be felon wanted for drug dealing… 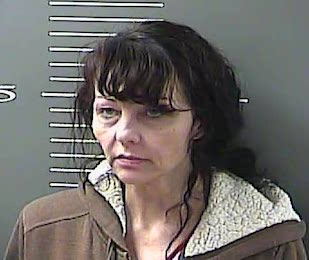 After a recent inmate escape and others in the past the latest attempt was different in at least two ways.

First, it was prevented and the attempted escapee was captured during the attempt, and secondly this time it was a female.

A somewhat heroic effort by BSRDC Corrections Officer, Debra Pennington to prevent Shelley Ferguson, who was hospitalized and receiving extended treatment at a Pikeville, KY hospital, from escaping custody on Monday, April 2nd.

Here’s a press release from BSRDC this morning (Wednesday)

“…Based upon and internal investigation and report by the staff of the Big Sandy Regional Detention Center, inmate Shelly Ferguson attacked Sgt. Pennington at around 3:00 P.M. at the hospital in an attempt to escape.

The attack was later determined to be premeditated due to the use of surgical tape and a plastic knife that the inmate had concealed in her bed.

Ferguson, who was in custody at the time for a Failure To Appear, a misdemeanor charge, had returned to her bed after a restroom break and was in the process of having her restraints reapplied when she tried to wrap tape around the officer’s face and mouth while threatening her with a plastic knife.

During the struggle Pennington was punched in the head and received several bite wounds on her hands and fingers. Sgt. Pennington was able to alert the hospital staff who helped restrain the inmate back to bed.

Sgt. Pennington was taken to the ER where she was treated and released. She is expected to return to work this week.

Inmate Ferguson was released from the hospital and transported back to the BSRDC by Lt. O’Conner and C/O Laura Jude.

After having been finger printed by the staff at the jail it was revealed that she was running from more than a Failure To Appear charge.

She is known to go by several other names which included Louelle R. McCarty, Lovelle McCarty as well as Michelle Ferguson. Those names revealed an outstanding warrant out of Lawrence County for a FTA on the charge of Alcohol Intoxication along with a Fugitive From Justice warrant on a felony drug Trafficking charge from Franklin County, Ohio.

She is currently awaiting an extradition hearing and is being held on a $50,000 cash bond.