OSBORNE SAYS THOMPSON SANITATION ‘OUT OF BUSINESS’; TRYING TO SELL EQUIPMENT TO PAY BACK CUSTOMERS 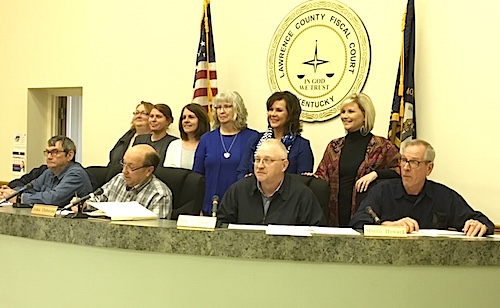 In Tuesday’s action the court:

*  Approved unanimously all motions except otherwise noted. Minutes of the February 20, 2018 meeting, Motion by John Lemaster,second by Morris Howard

*  Approved Resolution between County and State of Ky for $125,000.00 for Yellow Creek Road. No description of project.

*  Adopted and approved resolution on the Execution of MOA between Fiscal Court and Commonwealth of Ky, motion by Rick Blackburn, second by Earl Boggs. No description.

*  The Fiscal Court then opened bids for lawn service for the County mowing. Bid went to Premier Mowing and Landscaping for $2,150. MO.

*  Accepted a viewing report for clousure of a portion of West Clayton Lane, motion by John J. Lemaster, second by Morris Howard

*  Judge Osborne then called for a vote on the highly questioned program Needle Exchange/Harm Reduction Program. There were no (yes) votes. All Magistrates in one voice called out “NO”. The matter then ended.

“… I think this vote shows how representative democracy works. The magistrates are responsible for voting for what their constituents in each of

their respective districts want. Although some people want the needle exchange it appears that the majority of the county do not.

This is the way the system works. I feel that the Health Department is well intentioned and passionate about their public health initiatives. However, at the end of the day the will of the people in regard to this issue has been heard.

I can’t speak for the personal feelings of anyone on the fiscal court on this one specific issue but this vote was not a knee jerk reaction by the court.

The fiscal court members and Judge Osborne did their own investigation in the intervening 2 months since the initial request was made by the Health Department to implement the needle exchange. All the various stake holders such as the health department, law enforcement, and citizens were asked for input. Other officials in area counties were consulted and a needle exchange was toured. Some people may be upset but I think they should respect the decision that was made as being very conscientious of the issue.”

*  There were several comments from the community on Thompson Sanitation not only not picking up garbage for several weeks, but keeping the money that customers have sent them for services not received.

“Thompson’s Sanitation is done,” Osborne said. “The county attorney is taking the names of the people who paid ahead and is going to try and get their money back.”

A company out of the extreme west of the County complained that no one was picking up garbage in that area. The company, Childers Sanitation, is a permitted company in Carter Co. and was asking for Lawrence County to grant permission to pick up garbage where they live. 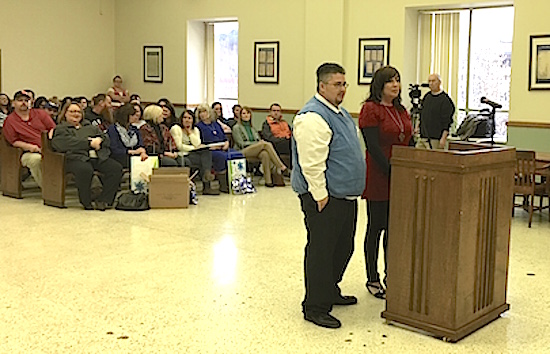 Cole Holder and Shiela Childers representatives of the company stated, “I live in Lawrence Co. Why can’t I make a living in the County where I live?”

Judge Osborne stated emphatically, “We have all the haulers we need at this time, Thompson Sanitation has gone out of business and is selling equipment to repay its customers if possible. If there are any complaints have them call the Judge’s office.”