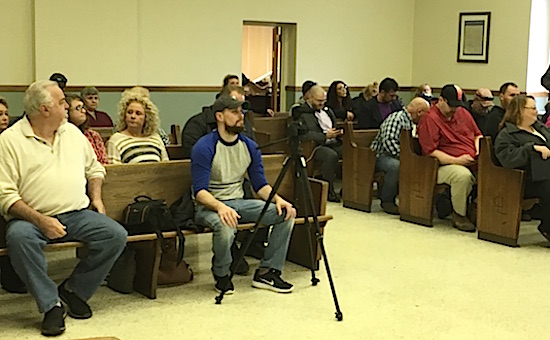 With ONE voice the Fiscal Court asserted, “NO” when asked by Judge Osborne to vote on whether the County would support the operating of a Harm Reduction Program.

The Vote was 5-0 to not approve the implementation of the Needle Exchange Program. When asked for YES, the room was silent. There was no discussion or comments made.

A large group was in attendance for the meeting, those approving the Harm Reduction Program. Those for on one side and the opposition on the other.

Judge Osborn stated,” There will never be one in this county. Unless it changes at the polls.”

“…Of course, I was disappointed by the outcome today, but I was not surprised. We anticipated it would be a no. However, that doesn’t mean it is a forever no and the health department will continue to educate the fiscal court and the public on Hepatitis C and HIV and best practices to prevent the spread of disease.

Needle exchanges have been getting a lot of negative publicity in our region recently. The program we proposed was a one-for-one needle exchange meaning a participant has to bring in a needle to receive a new one. We also proposed that a maximum of 40 needles was the most that any participant could receive in any one week. We tried to remove every barrier we could think of in hopes of a yes vote. I have no idea why the no vote. Only the magistrates can answer that and they did not comment at the meeting.

The message they are sending is that they are not concerned that Lawrence County has been identified as one of the most vulnerable counties in the U.S. to an HIV and/or Hepatitis C outbreak and that they do not want people who are physically dependent on drugs to receive complete medical care including needle exchange, overdose prevention, wound care, treatment and recovery. The bottom line is that although syringe exchange programs make us all a little uncomfortable, the science proves that they save lives. They save lives by preventing the spread of diseases through eliminating the sharing of needles and they save lives by connecting people to treatment and putting them on a path to recovery. I don’t understand how anyone could vote against that.”

The Lazer will add more to this story tomorrow.