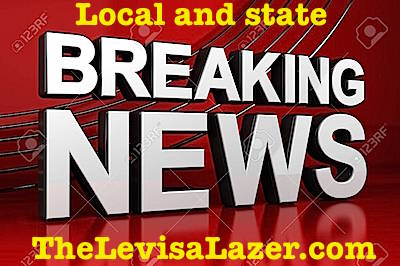 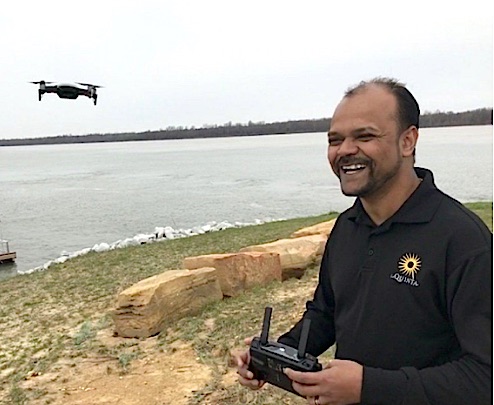 Vick Patel, a Paducah hotelier and 10-year local resident, does as good husbands often do — he’ll take a leisurely walk with his wife, Priyanka, when asked.

But he isn’t long for the couple’s casual strolls through downtown. Because, after all, why walk when you can fly?

“I’m not much of a walker,” said Patel, general manager at La Quinta Inn & Suites and Best Western Paducah. “I’ll walk once with her, and the second or third time she’ll walk by herself while I’m with my drone.”

Patel, 33, said lately he’s being recognized far more for something other than his ties to the local hotels, or his service as a Paducah Convention & Visitors Bureau board member.

He’s being noticed as “that drone guy.”

More formally, Patel is the aerial photographer behind the Facebook page, Paducah Drone. The page, created about a month ago, has gained more than 2,100 likes and followers in a few short weeks, capturing images of Paducah and the surrounding area from up to 400 feet with his DJI Mavic Air.

A drone hobbyist for two years, Patel launched the page around the time he captured images of crews installing floodgates downtown in late February.

Next came photos and 360-degree views of flooding around Harrah’s Metropolis, the reopening of the Beaver Dam Rest Area, new business openings on Hinkleville Road, and a gallery of downtown shots, night and day. He even took his drone — about the size of a shaving kit in its carrying case — along on vacation to the Turks and Caicos Islands.

But he said interest jumped with pics from the floodgates.

“I got that many and I was like, ‘Let me create a page just for this.'”

By Joshua Roberts
The Paducah Sun

FRANKFORT, Ky. — A House bill to ban the most common method of second-trimester abortion is near final passage after passing out of the Senate Judiciary Committee and the Senate on the same day, despite warnings that its passage would lead to a legal fight.

Committee Chair Whitney Westerfield, R-Hopkinsville, said concerns about being sued over a bill that protects an unborn child and the potential legal cost to taxpayers shouldn’t be a consideration in voting for this bill. “It’s worth challenging precedent,” he said. 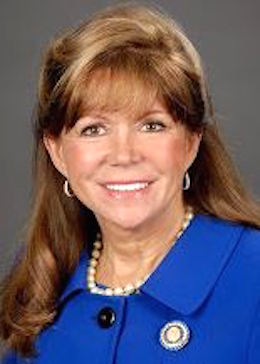 House Bill 454, sponsored by Rep. Addia Wuchner, R-Florence, would prohibit an abortion procedure known as dilation and evacuation, or D&E, after roughly 11 weeks of pregnancy except in medical emergencies. The procedure involves dilating the cervix and removing the fetus using suction and surgical tools.

If the bill becomes law, abortion providers found in violation of it would be guilty of a felony that carries a prison sentence. The women undergoing the procedure would not be prosecuted.

A federal court has struck down a ban on the procedure in Texas, and similar bans have been temporarily blocked in Alabama, Arkansas, Kansas, Louisiana, and Oklahoma while litigation proceeds. Mississippi and West Virginia have similar bans that haven’t been challenged in court, because the bans aren’t expected to have an impact on abortion services, according to the American Civil Liberties Union of Kentucky.

Sen. Wil Schroder, R-Wilder, told both the committee and the full Senate that no federal judge from the Sixth Circuit of the U.S. Court of Appeals, which covers Kentucky, has ever ruled on such a law.

Poor People’s Campaign:
A National Call for a Moral Revival

National leaders of the Poor People’s Campaign: A NationalCall for a Moral Revival will visit Harlan County on Thursday, March 29 to hear from eastern Kentuckians. The visit is part of a national tour as the campaign grows in size and gears up for a series of actions later this year to push its message that a moral revival is needed to address the problems of poverty, systemic racism, environmental devastation and the war economy.

The Rev. William Barber and Rev. Liz Theoharis, recognized national leaders, will join an anticipated crowd of about 150 for lunch and community conversation. People from across eastern Kentucky will share stories of their vision for their communities, the challenges they face, and the ways people are organizing to make life better for all.

The event begins at 12:30 p.m. at the Benham Schoolhouse, 100 Central Avenue in Benham (Harlan County). The event is hosted by Kentuckians For The Commonwealth.

1:00 – Table conversations: Reflections on how people are taking action to protect what matters and advance justice, particularly in addressing poverty, racism, economic injustice, and environmental devastation

1:50 – Overview of the Poor People’s Campaign: A National Call for a Moral Revival (Rev. William Barber and Rev. Liz Theoharis)

2:22 – Ways to be involved in Kentuckians For The Commonwealth and the Kentucky Poor People’s Campaign, and some next steps

Seating for the event is limited and registration is requested. Media: an RSVP is needed only if you plan to eat lunch. https://tinyurl.com?PPCinEasternKY

'EXPERT' ADVISES LEGISLATURE ON KENTUCKY WIRED -- GET OUT, AND GET OUT NOW