“…On this date, March 22, 2018 at 3:30 PM., I was notified by Johnson County Jailer Doug Saylor that two of the four work release inmates absconded from his custody and that he was unable to locate them. 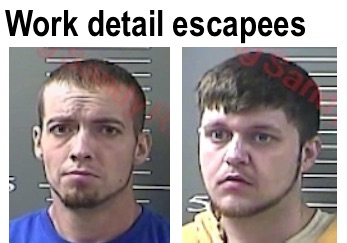 The two inmates were Jeremy R. Boggs, 30 and Brian E. Olson 23, both inmates are from Elliott County in Sandy Hook, KY.

The inmates were signed out of custody of the Big Sandy Regional Detention Center at 8:20 AM and had been participating in a litter collecting initiative on route 201 near Sitka at the time of their escape.

The two inmates are believed to have been picked up by an unknown accomplice after separating themselves from the work detail.”

There has been no news of the capture of the two escapees or what law enforcement agency is looking for them this morning.