As Senate budget takes money from teacher pensions to fund others, some claim retaliation 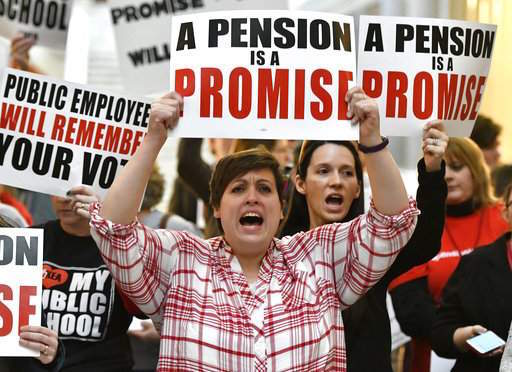 FRANKFORT, Ky. — The Kentucky Senate on Tuesday passed a budget bill that would slash funding to the Teachers’ Retirement System and move it to pension plans for state employees and police.

Critics say the move is in retaliation to teachers’ opposition to the pension reform bill, which stalled this month amid loud protests. But supporters of the bill say it puts pension dollars where they are needed most.

Beau Barnes, deputy executive secretary and general counsel for the teachers’ fund, said the move would have a significant impact.

“We’d likely find ourselves back in a more difficult, negative cashflow situation,” Barnes said. “There could be constraints on our ability to invest and also to sell assets to meet monthly retirement payroll.”

The Senate budget reverses a policy adopted by lawmakers two years ago to increase funding for the teachers’ pension fund by $500 million a year. That funded what the plan’s actuaries said was needed to pay off its $14.5 billion debt within 30 years, Barnes said.

It also was a major reason why — for the first time in many years — the outlook for the teachers’ fund improved last year, he said, although there were other reasons including a good year for investment returns.

Without continued funding at the higher level, Barnes said, actuaries say the plan could run out of money as soon as 2038.

Stephanie Winkler, president of the Kentucky Education Association, said of the move to slash funding for the pension fund, “I think it’s a direct retaliation against the fact that public education happens to have a loud voice, but it’s hard to say. We were surprised to see it.”

Senate Minority Leader Ray Jones, D-Pikeville, said, “I don’t understand a lot of things Republicans do. Others have made the accusation that it might be a punitive act because of the failure to support Senate Bill 1,” the pension reform bill that the education association and others have rallied successfully to block. “But I’m not making that accusation.”

But Sen. Chris McDaniel, the Taylor Mill Republican and chairman of the Senate budget committee, told reporters Tuesday that the move was made to put pension dollars where they are needed most.

“We changed the distribution. … We put extra money into the two worst-funded plans,” McDaniel said.

McDaniel said the Senate, like Gov. Matt Bevin and the House, proposed a total of $3.3 billion in spending on all eight state pension plans over the upcoming two-year budget period.

As for the teachers’ fund, McDaniel said the Senate provided full funding of what is required in state law. The Senate version of the budget shows that amounts to $490 million in the next two years.

But that is more than $1 billion less than in earlier versions of the budget. Of the $1 billion the Senate moved out of the teachers’ plan, the Senate put about $800 million in the pension plan for most state government retirees — the Kentucky Employees Retirement System for workers who held “nonhazardous” jobs.

That plan is just 13.6 percent funded, compared to the teachers’ funded level of 56.4 percent. McDaniel said that plan is the worst-funded public pension plan in the country.

The remaining $200 million was moved to the State Police Retirement System, which is 27 percent funded.

‘I don’t see a lot of hope for it’: Kentucky’s pension reform bill is unlikely to pass

Although the plan for state employees would get a massive windfall of $800 million – on top of money proposed by Bevin and the House that would fully fund what its actuary says is needed – an advocate for that fund had a subdued reaction.

“We are gratified that all three versions of the budget will provide the full actuarially required contribution,” said Jim Carroll, president of Kentucky Government Retirees. “…In the waning days of the session, it is vitally important that legislators examine revenue options that will help address the state’s myriad critical needs.”

Jason Bailey, executive director of the Kentucky Center for Economic Policy, said in an article on the center’s website that the Senate “massively underfunds” the teachers’ plan while funding the state employee and police plans “far beyond” what actuaries of those systems say is required in the next two years.

Bailey said the governor and House got it right in providing at least the amounts that actuaries of each system say is required for each to pay down their liabilities over time.