CRITICS SAY BILL WOULD BE THE END OF TRANSPARENCY IN KY. GOVERNMENT

FRANKFORT — Any government official in Kentucky would be able to use a personal device, such as a cell phone or laptop, to conduct government business and keep the records private under legislation being pushed by Senate Majority Leader Damon Thayer. 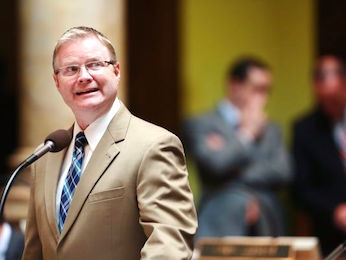 “This is a major, major reversal on Kentucky’s existing open records law,” said Jon Fleischaker, a Louisville attorney who was the primary author of Kentucky’s Open Records Act and Open Meetings Act.

The change would “eviscerate” Kentucky’s open records law and “make Kentucky the only state that would let government officials use personal devices for government business with no records of what they were doing,” said Amye Bensenhaver, an expert on Kentucky’s transparency laws.

Bensenhaver spent 25 years as an assistant attorney general, during which she wrote nearly 2,000 legal opinions on open records and meetings issues. She joined the Bluegrass Institute last year as director of the free-market think tank’s Center for Open Government.

“If this bill is enacted into law, it will —without question — represent the single most devastating blow to transparency in government in my 27 years of involvement with the Kentucky open records and meetings law,” she said.

Earlier this week in the Senate State and Local Government Committee, Thayer, R-Georgetown, amended House Bill 302, a measure dealing with reorganization of the Public Protection Cabinet, to say that emails, texts or calls on devices paid for with private funds and which do not involve government email accounts are not “public records” as defined in the Open Records Act.

It was sent to the full Senate and placed on its consent calendar, meaning it can be among a group of bills that are voted on without debate. If the Senate approves the bill, the House would then have to accept or reject the changes made by the Senate.

In presenting the legislation, Thayer noted that then-Attorney General Jack Conway in 2015 issued an opinion on his last day in office saying personal devices could be used for government business and not be subjected to the open records law. Such decisions carry the weight of law unless challenged in court.

“The amendment merely codified an Attorney General Opinion issued by Jack Conway in December of 2015 that has been unchallenged in courts,” Thayer said Thursday in response to a question from the Herald-Leader. “By putting it in statute, this gives additional clarity to the law. The amendment only applies to private devices that do not use government e-mails.”

Bensenhaver said Conway’s decision was deeply controversial at the time and not supported by his staff that routinely wrote open records decisions.

“No open records merit staffer would sign the open records decision,” Bensenhaver wrote in an article for Bluegrass Institute.

“We knew what a devastating blow to open government this decision represented; we knew that the overwhelming weight of legal authority did not support his position; we knew that nearly every state had taken an opposing position in case law or in statute; and we knew that, quite frankly, the decision opened the door to abuse of both the Open Records and Open Meetings Law,” she wrote.

Fleischaker said the Conway opinion has not been tested or reviewed in court. “This was not the first time Jack Conway has been wrong on an opinion,” he said.

Fleischaker noted that the Louisville Metro Council has a policy that every council member must conduct government business on government accounts.

David Thompson, executive director of the Kentucky Press Association, said he could not say at this time if Thayer’s legislation would be challenged in court should it become law.

“It does turn our open records law on its head and is not good for open and accountable government,” he said.