SPRING TURKEY SEASON STARTS APRIL 14. IT ENDS MAY 6 IN KY.

Turkey hunters interpret these occurrences as signs that it will not be long before they are easing into their spots before dawn, filled with anticipation.

In Kentucky, hunters still have ample time to scout and develop a game plan to increase their odds of success in the upcoming spring turkey season. This year, Kentucky’s youth-only season is the weekend of April 7-8. The start of the 23-day general statewide season follows on April 14. It ends May 6.

“Start at the computer then get out in the field to find birds,” said Zak Danks, wild turkey program coordinator with the Kentucky Department of Fish and Wildlife Resources. “Know some different approaches you might take and where you can move based on gobbling you hear once the season starts. Think about some good set-up spots or places to put your decoys, or vantage points to see birds.” 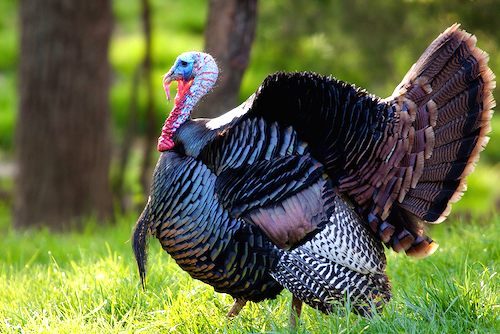 It is always a good practice before the season to shoot your shotgun at a paper turkey head target using different brands of turkey loads. By patterning a shotgun ahead of time, the hunter knows the shotgun will shoot where it is aimed and deliver an acceptable number of pellets to the turkey’s vital area (head and neck).

“One thing I’ve learned over the past several years is just how good the hunting can be later in the season,” Danks said. “Last year, in particular, I had hunters contacting me well after the season ended saying they were still hearing turkeys gobble. So don’t get discouraged if you don’t have success early on. There’s still time to find turkeys throughout the season.”

In Kentucky, the spring hunting seasons are timed to give gobblers enough time to breed hens before subjecting the birds to hunting pressure. Kentucky Fish and Wildlife monitors turkey reproduction on a statewide scale through annual summer brood surveys.

Weather during the nesting period in May and June influences reproductive success. Heavy rains in Kentucky and surrounding states during that timeframe last year affected nesting success, which reflected in a statewide average of 1.2 poults per hen. A figure of 2.0 or higher is optimal. Hunters should expect to encounter fewer of the more easily fooled jakes, as a result, this season.

Kentucky annually ranks first or second among surrounding states in the number of turkeys taken per square mile.
Hunters took a record number of birds during the 2010 spring season and have averaged more than 31,000 birds over the seven seasons since.

Last spring, hunters reported taking 33,061 birds, which represents a 6 percent increase over the previous year and the third highest total on record. Muhlenberg County led all counties with hunters reporting 681 birds taken there. Looking at it differently, Pendleton County led the state with 1.76 birds harvested per square mile.

The majority of counties are showing a stable to increasing harvest trend over the past decade. Some counties are exhibiting lower harvest totals. In response, Kentucky Fish and Wildlife is expanding efforts to monitor the turkey population and reproduction. Feedback from hunters will play an important role.

A new spring hunting log and a post-season survey will soon be available on the department’s website at www.fw.ky.gov. On the homepage, type “Spring Turkey Hunting” into the search box. The log serves to collect information about a hunter’s daily hunting effort, the number of turkeys seen, heard and harvested, observations about weather and other species observed. The post-season survey will include questions about spring hunting experiences.

“Our harvest totals tell us that we’re still in a pretty good situation on a statewide level,” Danks said. “We are hearing from people who tell us they’re not seeing as many turkeys as they had in the past. Most of that is from counties that have shown a decrease in the harvest. What’s the reason? It’s difficult to determine on a statewide scale when all we’ve had to go on is a harvest. We need information on hunter effort on a county level.

“The information gained from these hunter surveys and logs should help us track trends across the state.”

Hunters are allowed a limit of two bearded birds during the spring season, but no more than one bearded bird may be taken in a day.

The 2018 Kentucky Spring Hunting Guide provides information about current regulations, licenses and permits, legal equipment, safety tips and more. Find it online at fw.ky.gov or wherever licenses are sold.

Hunters also will have an opportunity to have their questions about spring turkey season answered during a special “Kentucky Afield” TV call-in show scheduled Saturday, March 24. The live one-hour show will air at 8 p.m. Eastern/7 p.m. Central on Kentucky Educational Television (KET). Joining host Chad Miles for the show will be Danks and pioneering turkey hunter Harold Knight.

Kevin Kelly is a writer for Kentucky Afield magazine, the official publication of the Kentucky Department of Fish and Wildlife Resources.