The story of Randall Craft

A few years ago, Randall Craft couldn’t imagine his life without drugs, but today not only is he two years clean, he’s also helping others find their way out of addiction. 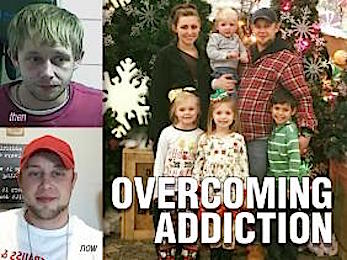 “I grew up on Middle Fork and everyone in town knew my father,” Craft said. “I looked up to him and learned from an early age to hustle and con. My mom did the best she could to raise us – seven of us – but she struggled. I don’t know how she did it, but it’s hard for a woman to be a mom and a dad both.”

Craft told the Independent that he was taught from a young age to hustle, con and steal, and that he thought that was what men were supposed to do.

“I played ball in school and people tried to lead me, but every time Dad got out of jail, I fell back,” Craft remembered. “That was my role model and I looked up to him in a negative way, but I didn’t realize it.”

At the age of 16, Craft’s grandmother, who lived next door to him and he had stayed with a lot growing up, passed away in his arms. Not knowing how to deal with the loss, he said he turned to drugs.

“From that point on, I was in and out of jails,” Craft said. “I was just a lost man. I wasn’t living, I was just existing. I had no soul.”

Craft spent eight years locked up in either jail or prison, some juvenile stints, stayed in five rehabs and was a three-time convicted felon. He went to several detox centers, but nothing was sticking.

“The last time I went to jail was in 2014,” Craft said. “They got me for stealing a car and intimidating a witness and I was on the run.”

Craft was caught in Pikeville and he entered into a six-month substance abuse program in jail.

After being released, he met Alysia. She had been his sister’s best friend growing up. His sister, Coco, who had only tried drugs a time or two, overdosed at the age of 18 while a senior in high school.

“I held a grudge against myself for years over that,” Craft said about his sister’s death.

About Alysia, Craft said, “When we got together, she was the first good girl I had had in my life.”

Craft had a daughter from a previous relationship and Alysia had two kids from her first marriage. During this period of being clean, Alysia got pregnant with their son.

“It got good for a while and I was clean, but I hadn’t changed who I was,” Craft said. “I was still hustling and stealing.”

“I put her through hell,” he remembers. “We fought, I would beat her. I would steal from the kids. I would take the diapers we had set up for our son, take toys. It was pitiful and she would just sit and cry, but she was so strong.”

Craft inevitably went to jail on a theft charge, but she still stayed with him.

In November 2015, their son was born, but he said he almost missed it.

Christmas Eve 2015 the couple got into another bad fight and the next morning, when the kids were wanting to open presents, he said he left to get pills.

“When I came back, she was gone,” Craft said. “She was packing up and her dad was there with a shotgun. She got an EPO on me and I ended up going to jail to start off 2016.”

She inevitably dropped the EPO on Craft, but wouldn’t have anything to do with him, including keeping the kids from seeing him.

“Without her and my kids, I had no life,” Craft said. “I would just sit at my sister’s grave every day and ask God why I wasn’t in that grave instead of her. I blamed God, but it wasn’t his fault, it was my own fault. I thought he had left me in this world to punish me and my sister was the only person I could relate to.”

Social workers assigned to his case would tell him he wouldn’t be able to see his kids if he didn’t get clean, but he said he would just shoot up and cry about it.

He went into detox on February 17, 2016, but only after spending the last of his money to get drugs before checking in.

“I had money that day and could have left that for my family, but I got a shot of dope,” Craft said.

He sat in the hospital for 10 hours and said he wanted to leave, but something told him to stay.

His blood pressure dropped and he ended up having five seizures during detox.

“I woke up five days later, and got out and could have got a bed at Belle Grove,” Craft said. “The good thing about ARC (Addiction Recovery Care) is they can get you in quick – within 24 to 48 hours and when you’re on the verge of death, hours matter.”

Thinking he was clean now, he said he went back to the streets, but he didn’t use drugs. Alysia still wouldn’t talk to him, so he finally went into Belle Grove Springs, a residential treatment center in Wallingford, Kentucky, on March 17, which would have been his grandmother’s birthday.

“I snuck a phone in and got caught,” Craft said. “It’s crazy how God works. I was only half in there and half in the world, still staying on Facebook.”

Pastor Kyle Burchett sat down with Craft and had a very frank conversation with him.

“He said, ‘What if you take how you hustle and con and use it to help people for the good? Change your ways. Quit being a punk,’” Craft remembers. “And for once in my life, I actually listened. All I had ever been was a punk. I wanted to be like Dad, but that just kept me in jail, hurt my family, my kids. I had a spiritual awakening and I never looked back.”

Craft quit trying to get his family to come see him. He didn’t try to use the phone. He spent every waking hour working on himself.

“I finally learned acceptance and I worked on Randall Craft,” he remembers.

During that time, he said he learned to respect his surroundings, picking up garbage and taking care of things. He started listening to people and learned to stop being prideful.

“I stayed 43 days, but I could have left on the 42nd day,” Craft recalls. “I didn’t want to be there when I got there, but by that point I didn’t want to leave, so I stayed one more day, going to Christ Temple Church in Huntington. It was something I didn’t know I was going to do.”

The sermon that day, preached by Todd White, a former addict, was about how sins can be forgiven and letting go of yourself to move forward.

“I got saved that day and I moved forward,” Craft said. “I went home, staying with my mom, but I didn’t talk to Alysia at first. I enrolled in Prestonsburg’s ARC outpatient and I put my trust in Him.”

Craft made sure to go to all of his meetings, and started going to church in Morehead.

“I knew if I didn’t have Randall Craft together, I couldn’t be good for anyone, so I didn’t try to reach out to Alysia and the kids. The true definition of patience is love.”

After a month, he started going around his kids, again, taking them to church.

“I never said sorry because I knew my actions would have to speak for themselves,” Craft said. “My life had to be the message, and Alysia saw the change in me I didn’t even know about, yet.”

Alysia started going to church with him, as well, and was also saved. In June 2016, the two tied the knot.

“I had a conversation with the pastor who told me I can change the generational thing,” Craft said. “My dad learned that lifestyle, and I learned from him, but my family is all in church. My two-year-old prays for us. My kids have an opportunity I never had. Mom tried her hardest, but I’ve had people I work with reach out to help us out and I don’t know what I would do today without them. It’s amazing how God works and restores us.”

Today Randall Craft says he puts his faith in God and not let the world, the negative comments, the tough times lead him away from that path.

Craft now works as a pastoral counselor and peer support specialist at the same residential treatment center that he attributes to turning around his life, Belle Grove Springs, a branch of Addiction Recovery Care (ARC). ARC works to get people into treatment quickly, helping them get insurance if they’re uninsured, includes job training, and after 12 months of sobriety they can be hired by the same company.

On top of working full-time and taking care of his family, he is also going to school full-time, about to receive his Associate’s degree and then going on to Morehead for his Bachelor’s in social work.

“I just want people to know there’s hope for them,” Craft said. “You have to put it out of yourself and come and get help. I’ve slept outside, ran around in misery, robbed people – done it all. I try to make amends when I can, but I can’t change all of that. I just have to change my life and help people along the way, and everyone else can do it, too, but it takes them to do it.”

As for working with people battling addiction, he said, “I love to see the hope in their eyes and I know they can do it. I was in the same seat a little over two years ago and I wish I could save everyone, but without the love of Christ, without God in my life, I can do nothing, and I really mean that. I never thought I could do it, but it took finding spirituality in my life.”

Alysia Craft said, “He’s changed everything about himself and he’s humble about life. He doesn’t take anything for granted. He’s changed his whole perspective and taken responsibility for things. He works hard to fix the things he does wrong. If Randall can change – and he’s done it all – anyone can. He’s very strong-willed and you have to have to be strong-willed to want this. Recovery is hard, but he works every day to stay clean.”

Meadows, a retired trooper who holds bible studies at Belle Grove Springs, said Craft didn’t trust him – or any law enforcement – when he arrived there, but after he accepted God, everything changed and he’s been involved in his life ever since.

“He’s done a complete 180 and he’s bringing his family with him,” Meadows said. “His mother loves him dearly, but Randall is living a different kind of life now that will make a difference in his kids’ future. He’s changed his whole family tree. He made a lot of wrong decisions, but that’s all history and God takes our messes and He’ll make a message. He’s taken Randall’s messes and made a message and prepared him for where he’s at now.”

“These men would not be able to come without Randall and it’s not uncommon to see four or five gentlemen on a Friday night give their life to Christ,” Halsey said. “He knows addiction can be beat and he’s a soldier for Christ, a warrior against addiction.”

For more information about any of the programs, those interested can call 606-638-0938 or visit www.arccenters.com.