FRANKFORT, Ky. — A Kentucky House proposal to transfer $481 million out of an employee health insurance fund could result in much higher premiums for thousands of teachers and other public workers, critics say. 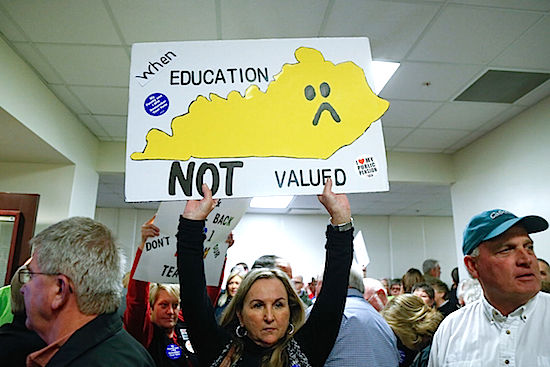 “This is a huge concern, in some ways more so than the pension issue because it would have a more immediate, significant impact,” said Brent McKim, president of the Jefferson County Teachers Association “… It would come next year and the year after, and we could be looking at premium increases as high as 50 percent.”

David Smith, executive director of the Kentucky Association of State Employees, said, “It’s a tax on state workers. … It’s bound to cause our workers’ health costs to go up.”

Last week the House revised the austere budget proposed by Gov. Matt Bevin in January, restoring money that Bevin would have cut in many areas of public education and higher education. The House found money to do so with a collection of modest tax increases — and with the massive transfer of funds from the Kentucky Employees’ Health Plan.

For several years this health insurance fund has accrued big surpluses. And governors and lawmakers have repeatedly tapped those surpluses to enhance spending in budgets strained by weak growth of tax revenues and soaring pension costs.

The budget Bevin proposed in January called for transferring another $201 million from that fund over the next two years. But last week the House increased that to nearly $481 million.

The Kentucky Employees’ Health Plan is administered by the Personnel Cabinet and insures about 146,000 teachers and public employees plus their family members. It gets roughly 80 percent of its money in contributions from the state and about 20 percent in premiums from the employees, said McKim, who sits on the board that oversees the plan.

As of Dec. 31, the fund had a balance of $728 million, according to the Personnel Cabinet’s website.

But Jason Bailey, executive director of the Kentucky Center for Economic Policy, said his analysis of the fund’s online records shows that more than $300 million of that must be transferred to the state’s General Fund before July 1 under terms of the current state budget.

McKim said by transferring $280 million more out of the fund than Bevin proposed to transfer, the House budget would depart from past practices of tapping only surplus funds.

He said he was told by Personnel Cabinet officials that the move would likely result in premium increases of at least 10 percent for 2019 and as high as 49 percent in 2020. “Or the alternative would be to change the plan design by reducing the benefits. You pay one way or the other,” McKim said.

Smith said: “The concern is simple. The fund bases its decisions on what money is there. So the less money is in there, the more they charge state workers.”

Personnel Cabinet Secretary Thomas Stephens did not respond to a request for an interview about the fund. But Jodi Whitaker, the cabinet’s spokeswoman, said in an email that the much lower amount that Bevin proposed to be transferred out of the fund would not result in any premium increase for plan members over the next two years.

Rep. Steven Rudy, the Paducah Republican who chairs the House budget committee, said he believes the transfer can be made without such pain.

But Rudy added, “This is not the final product,” and said that the House is open to discussing the matter with the Senate as the final budget is hammered out over the next month.

Sen. Chris McDaniel, a Taylor Mill Republican who chairs the Senate budget committee, said the impact of the House move will be thoroughly examined by his committee. “We’ve got our people digging into that. It’s among the first things we’re trying to determine,” McDaniel said. “I know what the House did was with good intentions and applied to good purposes. But at the end of the day, depending on who you are talking to, the effects vary.”

McDaniel said he expects his committee will finish its review and approve a revised version of the budget bill within the next two weeks.