Frankfort’s future could be female;

Nearly 100 women are running for the Kentucky legislature this year, joining a national trend seen since the election of President Donald Trump and amid the #MeToo movement against sexual harassment and assault.

In all, 61 Democrats and 31 Republicans are running for seats in the General Assembly, according to Secretary of State Alison Lundergan Grimes and officials for the state’s two major parties. Only 22 of them are incumbents.

The number of female candidates seeking a legislative seat appears to be a record, she said. The number dwarfs the totals seen in 2014 and 2016, when fewer than 40 women filed to run for the statehouse during each campaign cycle, she noted. 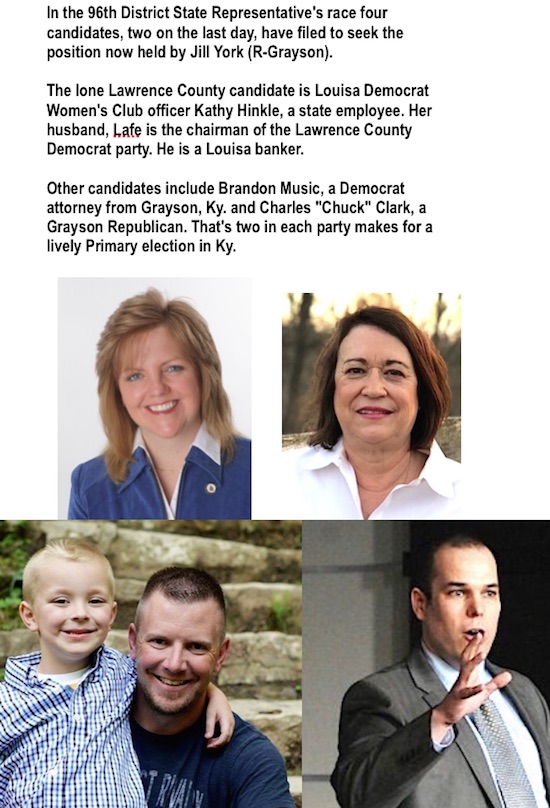 “Pensions are part of the contract given to teachers. This is a promise we must keep. Occasional tweaks may be needed but not an overhaul of the entire system. We each owe our education system for our present positions”

“Economic development, our future depends on a trained work force, updated infrastructure and availability pf areas for new types of jobs to operate”

Jill York, R-Grayson 96th District incumbent, had plenty to say on the pension/budget issue but didn’t mention the female uprising in Kentucky and across the nation.

“I remain a “No” vote on SB1, the pension bill, as it stands currently.

The budget bill, HB 200 CS, as amended by committee substitute passed the House recently and I supported it as it contained additional funding that allowed many cuts that had previously in the bill to be reversed.

Voting for this bill was a huge step toward getting resources and dollars put back toward education. HB 200 CS does these things:

It fully funds the state’s contribution to the pension plans
It restores transportation dollars back to school districts
It restores funds to teacher health insurance for year one, and allows it to be funded from reserves in year two
It increases SEEK per pupil funding to $4,055 in the first year of the biennium and $4,056 in the second year. This is the highest funding per pupil ever in Kentucky.
It provides for Safe Schools and FRYSC’s programs to be made whole from the 6.25% cuts and gives them additional funding.
That is a huge change for the better.

It gets things rolling in the right direction of meeting our needs but we still have more work to do.

The bipartisian passage of HB200 CS, shows that with further tax reforms we may capture enough money to fully fund the teacher’s health insurance for year two as well — thereby protecting the reserves — and providing revenue to use elsewhere in the budget.

Also important to note that within the bill there are a couple of fund transfers to the state’s general fund that sound shady if you don’t understand what is going on with the dollars. It has been mischaracterized in some instances and that leads teachers to fear the worst.

One transfer involves the Permanent Pension Fund and the other the self-insured fund. Here’s what is really happening to those assets…

The Kentucky Permanent Pension Fund was a brand new deal set up by the Governor as a repository for any “extra” monies found to use to address the pension troubles. As we are in pension crisis mode and all available resources are going toward pensions, the Governor recommended dissolving the fund to free up those funds rather than have them sit in fund for a someday use.

That other transfer from the self-insured fund for all state employees is one where the state pays a part of the premiums. At year’s end, when the premiums have been paid, the surplus is placed back in the general fund. That’s the normal way it is handled and it is only a transfer of the surplus that is left in the account. It has nothing to do with the retired teachers fund.

That’s a lot of information to process, but it is important to me that you understand what was going on with this “improved” bill.

I voted as I did because I believe in our students, our educators and the great programs we have that help raise up talented, successful Kentuckians.”

“That’s quite a leap and bound,” said Grimes, a Democrat who took office in January 2012. “I believe the work that we are seeing now of people stepping up and having the courage to serve exhibits exactly the energy we saw after the presidential election just continuing to grow.

“This is why I came to Frankfort,” she added, saying she ran for a statewide office partly because she worried there otherwise
might be no woman serving at that level in Kentucky. 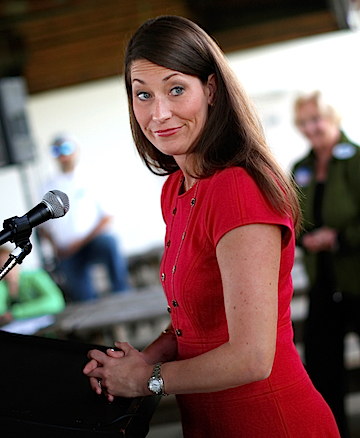 Since then, she has seen growth in the number of women pursuing public office. In addition to a huge increase in women running for the legislature this year, Grimes said a high number of current and former educators — nearly 40 (many of whom are women) — are running for Kentucky’s Senate and House of Representatives.

“We are on par if not surpassing presidential election years” in terms of candidate filings overall, she said. “The energy and momentum across the board is overwhelming.”

Nationally, the Center for American Women and Politics is already seeing a surge in the number of women interested in competing in the upcoming election, information services coordinator Chelsea Hill said.

Republican and Democratic women already involved in Kentucky politics say they see a rising interest in public service at both the local and state level among women.

The 2016 presidential election — which ended in November 2016 when President Donald Trump defeated Democrat Hillary Clinton, the first female nominee of any major U.S. political party — spurred many Americans to take a greater interest in political activism.

His election sparked the Women’s March in January 2017, a massive, worldwide demonstration in which hundreds of thousands of people turned out to denounce statements Trump has made about women as well as his stances on matters like immigration. The march also advocated for issues such as worker’s rights and civil rights.

And it fueled discussions about the need for more women in public office and other positions of power.

Harvey Weinstein and others — encouraging more and more women to speak up about their experiences with sexual harassment and assault.

Adams hopes to encourage more conservative women to run for the legislature through Kentucky Strong, an organization founded during the 2016 election cycle that recruits, trains and assists pro-business Republican women interested in public office.

“They say that you have to ask a woman three times to run for office before she’ll even consider it,” Adams said. “And so I thought, ‘I want to be that person that tries to cultivate that woman to share her knowledge and share her skills in this realm.’ ” Ashley Bruggeman, a Republican first-time candidate from Lexington competing for the House’s 88th District, said every person must earn her or his seat, but it’s great to see women feel more emboldened to take on these leadership roles.

“As there’s this push to fill boardrooms with women and chief executive positions within corporations (with women), then it only makes sense that it would trickle over into politics as well,” said Bruggeman, who works in the construction industry. “It would be incredible to be able to work with a large number of other women in the legislature.”

Nancy Tate, a Republican who lives near Brandenburg and is running for the House’s 27th District, also sees this as a natural transition. When she started working in management for UPS 30 years ago, she said it wasn’t unusual for her to be the sole woman in the conference room.

But Tate isn’t the only one there anymore, and she said it’s time for women to be closely involved in government, too.

Like Tate and Bruggeman, Charlotte Goddard, a teacher and Democrat from Hickory, is also campaigning for office for the first time.

Goddard, who is pursuing the House’s 2nd District seat, said the #MeToo movement and the 2016 election played a role in her decision to run.

So did her belief that it is critical for educators’ voices to be heard in state government, which controls the future of the troubled public pension system for teachers and shapes numerous policies that impact students and schools across the commonwealth.

“Education is very important. It’s foundational,” Goddard said. “We have got to have an educated society.”

Goddard is also part of the 2018 training class for Emerge Kentucky, an organization that has recruited nearly 200 Democratic women to run for public office since 2009.

“The level of enthusiasm and interest has absolutely grown with the culmination of the 2016 election and the #Me-Too movement,” Emerge Kentucky Board Chair Jennifer Moore said, noting that giving women their voice is what both #MeToo and Emerge aim to do.