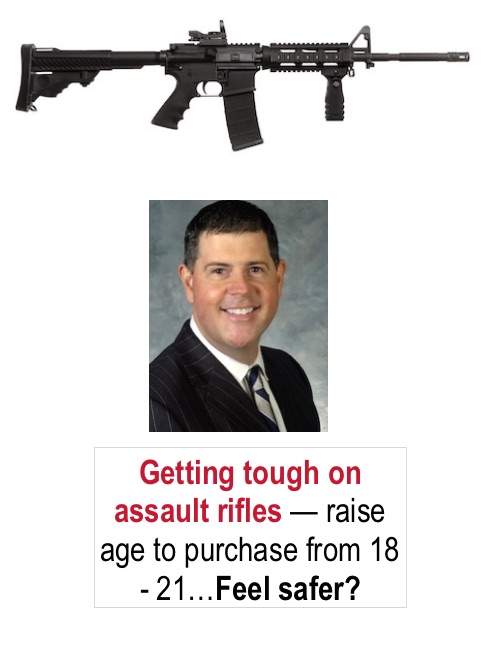 HB 498 follows Harris’ speech on the floor of Kentucky’s House of Representatives the day after the mass shooting in Parkland, Florida, and the shooting in Marshall County, KY.  In his floor remarks, Harris said he was tired of saying prayers after each mass shooting but never taking any action.  Harris said, “prayers without action are empty” and ended his remarks by rescinding his NRA ‘A’ rating.

Harris said, “HB-498 takes a very modest, common sense approach to improving the safety of all Kentuckians by raising the age to purchase a military-style assault rifle like the AR-15 from 18 to 21.

This common sense change simply makes the classification of assault rifles like the AR-15 consistent with current gun laws requiring a Kentucky citizen be at least 21 to purchase a handgun or obtain a carry-concealed permit.

The fact that it is easier for an 18 year-old in Kentucky to legally purchase an AR-15 than to purchase cold medicine or beer defies common sense.  By raising the minimum age to 21, we are taking a small step toward better protecting the public; and perhaps preventing or at least minimizing the deaths and injuries like those that occurred in Parkland, Florida.”

*  Raises the age to purchase a military assault rifle

*  Does NOT violate anyone’s 2nd Amendment Right like the AR-15 from 18 to 21; exempts active duty

*  Does NOT take anyone’s assault rifle away.

In addition to drafting and sponsoring HB 489, Harris has also co-sponsored two other commonsense gun safety measures since his February 15 floor remarks.  HB 409 bans the sale of bump stocks and HB 411 requires all guns confiscated in the commission of crime that are not kept for official use be destroyed.  Currently, Kentucky law requires all guns used in the commission of a crime be resold at public auction.