$ 1 DOLLAR PER PACK TAX ON CIGARETTES PROPOSED BY LEGISLATORS

Lobbying on cigarette tax ramps up, with foundation’s ads and tobacco firm’s use of farmers, retailers and paid media report 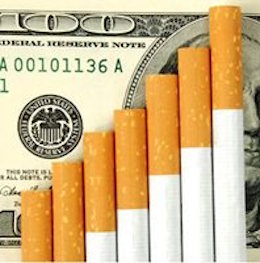 Raising the state cigarette tax $1 a pack is an active idea among members of the Ky. General Assembly

FRANKFORT, Ky. — If activity by lobbying interests is any indication, the idea of raising the state cigarette tax $1 a pack is an active idea among members of the Kentucky General Assembly.

The main group advocating the tax increase, the Foundation for a Healthy Kentucky, reported spending more than any other lobby during the first month of the session. Its total of $100,240 was not far ahead of collective spending by tobacco companies that oppose the tax hike, which totaled $95,218.

The leading pro-tobacco spender, at $44,643, was Altria Client Services, a subsidiary of Altria Group, which includes Philip Morris USA, the nation’s largest manufacturer of tobacco products.

This month, Altria spent an as-yet-undisclosed sum with Commonwealth Radio Reports of Louisville, which distributed a 45-second audio report to Kentucky radio stations about tobacco farmers and retailers lobbying legislators against the tax increase. The report did not say who sponsored or produced it.

Richard Farmer, the reporter and company owner, told Kentucky Health News that Altria brings tobacco farmers to Frankfort every session, but this year added retailers. That indicates the stakes are higher; in addition to the foundation’s campaign, the state faces serious revenue problems.

The foundation is also using paid media. It has laid out more than $98,500 for an advertising campaign set to begin Monday, Feb. 26, Marcus Green reports for Louisville’s WDRB. The foundation is staffing the Coalition for a Smoke-Free Tomorrow, comprising more than 150 groups and individuals.

“It will be a multimedia campaign,” Bonnie Hackbarth, spokeswoman for the foundation and the coalition, told Green. “We will be using billboards, cable TV, digital, and we will be focusing on the health benefits that can be achieved through a $1 or more increase on the tax on cigarettes.”

“Hackbarth said the coalition, whose members include health, business and other groups, does not expect that a standalone bill raising the cigarette tax will pass during the current session,” Green reports. “But she said it’s possible the measure could be added during budget negotiations or approved in a special session on tax reform. Advocates estimate a $1-per-pack cigarette tax could generate more than $266 million for the state each year while also reducing smoking-related illnesses.”

Hackbarth said of the ad buy, “This is the first wave and we will continue until we will be able to win.”

In his report, Farmer said, “Opponents say the tax hike would unfairly burden those least able to pay, the nearly 48 percent of low-income Kentuckians who smoke, and it would hurt the family farm, according to Christian County farmer Robert Gray,” who said tobacco prices are stable, unlike those for other farm products.

Altria’s allies also argue the hike would be “counterproductive,” Farmer reported, because “60 percent of states recently increasing cigarette taxes failed to meet revenue projections. Growers pointed out that higher taxes would drive smokers across borders to buy cigarettes, harming Kentucky convenience stores, which derive more than a third of their sales from cigarettes.” Dan Hartlage of Guthrie Mayes Public Relations in Louisville, which works for Altria, was asked the source of that data and what “recently” meant, but didn’t provide the information.

Raising the tax $1 a pack would make it $1.60, the same as in Ohio but much higher than the 99.5 cents in Indiana, the other state that shares a major metropolitan area with Kentucky. The rates in other bordering states are $1.98 in Illinois, $1.20 in West Virginia, 62 cents in Tennessee, 30 cents in Virginia and 17 cents in Missouri; the last two are the lowest in the nation.

Foundation President and CEO Ben Chandler said in an email that tobacco manufacturers are “hiding behind farmers,” who “get about 3 cents per pack of cigarettes for their tobacco. Yet the health-related costs are about $35 per pack. And every household in Kentucky pays about $1,200 in extra taxes each year to cover those health costs. We’re grateful that lawmakers are beginning to understand this message, and will keep working until we can announce we’ve kept our promise to make Kentucky healthier by reducing smoking and exposure to secondhand smoke.”

LAWRENCE CO. HEALTH DEPT. is participating in the program and has run a media campaign on many tobacco concerns.