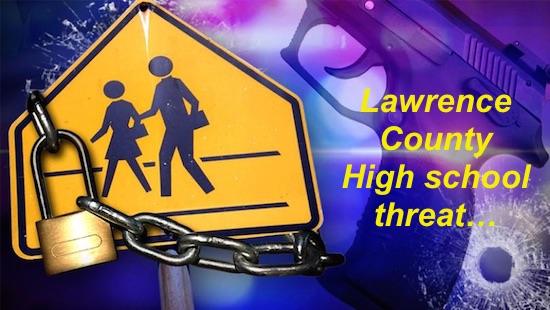 A 17-year-old boy was arrested Tuesday after allegedly threatening to carry out a school shooting at Lawrence County High School, according to the Kentucky State Police

The boy, whose identity was not released due to him being a juvenile, is charged with second-degree terroristic threatening, a Class D Felony, punishable by a sentence of 1-5 years. He was taken to the Boyd County Juvenile Detention Center in Summit.

Troopers say the threat to the Lawrence County High School was unrelated to another alleged threat against the high school on Tuesday, but the KSP officers that were investigating the second threat determined that it turned out to be an unfounded rumor at LCHS.

The shooting threat against Lawrence County High School marks the latest wave of school threats against Eastern Kentucky schools since the deadly school at the Marshall County High School in wesrern Kentucky on January 23. Since January 24, there have been 24 school shooting threats in Eastern Kentucky (including the Lawrence County threat), with most threats made in one county – Boyd County – having five separate threats made against several schools in Boyd County.

However the majority of the Eastern Kentucky school threats have been made since Valentines Day school massacre at the high school in Parkland, Florida

While most of these threats have been verbal or on social media, all law enforcement agencies are taking each threat seriously. A majority of those making the Eastern Kentucky school threats have been arrested and charged, with all but two of them being juveniles.

Here the compiled list of the other 23 school threats in recent weeks:

However, a recent statistic quoted after the Parkland massacre by nearly every major news media outlet, that there have been 18 school shootings in the U.S. since January 1, a stat that originated from the  Everytown for Gun Safety, a gun-control advocacy group responsible for spreading this statistic, and that they should be embarrassed of its numerical report dishonesty by issuing a fake statistical report like they did, makes finding a solution to the real problem of gun violence, which has actually struck American schools at only just least six times this year, that much harder.

When the Washington Post reported Everytown’s propaganda, it included some important caveats:

“That data point … includes any discharge of a firearm at a school — including accidents — as a ‘shooting.’ It also includes incidents that happened to take place at a school, whether students were involved or not.”

The Washington Post should have kept including caveats. According to Everytown’s criteria, nobody has to be injured and the “shooting” doesn’t actually have to take place on campus, though it does have to be heard on campus or a bullet has to hit somewhere on campus.

Here are some examples of the inflated school gun violence numbers for 2018 by Everytown for Gun Safety:

►On Jan. 3, a 31-year-old “military veteran who suffered from post-traumatic stress disorder, a traumatic brain injury and depression” shot himself in a school parking lot after he called police to report he was suicidal, according to the Lansing Michigan State Journal, (Everytown removed this instance from their report after the Washington Post found that the school had been closed down for months.)

►On Jan. 10, in Denison, Texas, at Grayson College Criminal Justice Center, a student mistook a real firearm belonging to an officer, who was authorized to carry the weapon, for a practice weapon and fired it into a wall. No one was killed or injured.

►On Feb. 5, in Maplewood, Minn., a third-grader pulled the trigger on a police gun while the officer was sitting on a bench. No one was killed or injured.

In eight of the 18 cases originally counted by Everytown, no one was injured or killed. Two were suicides.

(This report contains opinions of the writer. TheLevisaLazer.com does not necessarily agree or disagree with the opinions.)