FACES OF HOPE: WE DO RECOVER …Royia Manley’s story, Blessed and Highly Favored 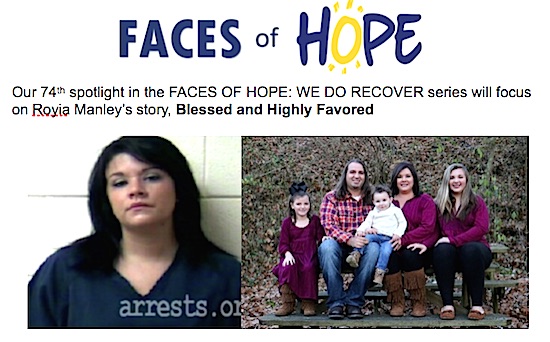 I had a decent childhood. I wasn’t a troubled child in my younger years. After my mother and father divorced when I was ten, I became very angry. I believe this was the first time that I had ever really been angry. At that age, I wasn’t able to put a name on the emotions that I was feeling. Anger. That was the emotion that I felt. Anger was followed by feelings of not being enough and low self-esteem. Did I know that then? The answer is no. I had no idea what I was feeling, I just knew I didn’t want to feel that way. I took my first drink was I was ten years old. The first time that I used marijuana I was 12. I smoked cigarettes regularly by the time I was fourteen. Those feelings of anger and feeling like I wasn’t enough or wasn’t loved went away. I was constantly looking for a way to make myself feel better. At fourteen years old, I was arrested for theft by unlawful taking.  I was put on probation and was made to complete community service. My parents were fined $200.00, which they paid. I was on juvenile probation until I was eighteen years old. I managed to stay out of trouble for the next four years. I completed six hours of college credit hours my senior year of high school. I was awarded several scholarships to Morehead State University. All the while, I was continuing to drink alcohol, I was introduced to benzodiazepines, and continued to smoke Marijuana periodically.

I started Morehead State University in the fall of 2006. Everything was completely paid for, including living on campus. I was going to school in hopes to one day be able to provide for future family. I had the hope that I would marry my high school sweetheart and have a child once I was finished with school. Toward the middle of that school year, I started to drink more heavily. I went to frat parties, and I broke up with my boyfriend. That year I also found out that I would never be able to have kids. I was absolutely devastated. I was introduced to prescription pain pills. The first time that I ever used a narcotic I made a decision that I wanted to feel that way for the rest of my life. I was able to no longer feel any emotion. I eventually stopped going to class. I moved off campus. I started hanging around people that scared me. I didn’t care. By this time, I was in full-blown addiction. I decided in the spring of 2008, I would make a frail attempt at going back to school. I had lost my scholarships and I had to take out loans. The worst thing that a person in active addiction can receive is a lump sum of money. I blew thousands of dollars within a month. I ended up withdrawing from all my classes completely. Things went from bad to worse. The whole time I was lying to myself, telling myself that I could quit whenever I wanted. I just didn’t want to.

Shortly after withdrawing from Morehead State University, I gained a job as a waitress at Applebee’s. There I met someone who introduced me to Heroin. I always promised myself that I would never use a needle. When someone is in active addiction, all morals and promises become non-existent. I injected Heroin. At this time, I had isolated myself from my family and my real friends. I had to keep who I had become a secret. I convinced myself that everyone did what I was doing. I had to convince myself of that to make all the lying, stealing and my dishonest behavior justifiable. Not one word I spoke was the truth. I pawned everything that was of any value and eventually quit the job at Applebee’s. I stopped using Heroin but continued to use prescription pain pills. “Pain pills aren’t as bad as Heroin. I am not injecting pain pills” That is what I would tell myself. In order to support my habit, I started selling narcotics. It didn’t take long for me to get caught. A confidential informant wore a wire for the local police department. I had absolutely no knowledge of this.

I went to Wal-Mart and stole materials to make jewelry. I was caught and taken to jail.  When I met with the pretrial officer I was informed that I had a sealed indictment for trafficking. My bond was $20,000. I had two trafficking charges. Each charge carried 5-10 years and both were felony charges.  I stayed in jail for a month. I was released on bond under the condition that I would not use alcohol or illegal substances. Now, not only was I angry, I was resentful, shameful, dishonest, fearful, hateful and unpleasant. I believed in God, only to blame God for my misfortunes. I was most of all angry at God. I had become the vague resemblance of a human and my state of being was desolate. I continued to actively use opiates, cocaine, benzodiazepines, and smoke marijuana. I managed to stay out of jail until my final sentencing court date. I showed up intoxicated, and was placed back in jail. I was in jail nearly four months. I have never been so sick in my life. I was detoxing from methadone and Xanax. I prayed for death. I prayed the prayer of desperation, “God if you get me out of this, I will never do it again.” This wasn’t the first time I prayed for death. I prayed for death a few days before was arrested. I asked God to bring me home. I asked God to relieve me of my duties. In that moment, before I was incarcerated, I felt the overwhelming sense of peace and knew everything was going to be ok. Fast forward back to when I was laying on a concrete floor in a jail cell. I thought I had destroyed my life. I thought I was going to prison. I was hopeless. At some point, an alternative sentencing worker came and assessed me for inpatient treatment. I was lucky enough to be offered a felony diversion upon completion of inpatient treatment. I was released from jail on November 24, 2010 to attend The Healing Place in Louisville, Ky. Since that day my life has never been the same.

The Healing Place taught me discipline. Those women showed me love and they were all just like me. I began to work the 12- steps of Alcoholics Anonymous. I worked through all the fears and resentments. I found a God of my understanding. I didn’t have to look far. Without the spiritual component I would not be where I am at today. God was with me the whole time. God seemed far away because I was the one moving, not God. I have a sponsor and I am a sponsor today. I have a family whom I love with all of my heart. I was able to go back to college and gain a degree in Social Work. I completed my felony diversion, on my birthday, in 2015.  I am the mother to a beautiful 23 month old little boy. MY SON. My son, that I carried for nine months, when I was told I would never have children. I am an employee. I am a friend, a sister, a daughter and a wife. I am proud of who I am today.

My aha moment came when I was in active addiction. It was a moment of clarity when I realized that I could no longer live the way I was living. That day, I think I finally admitted to my innermost self that I had a problem.

I was angry, hopeless, hateful and felt less than. I felt like wasn’t enough. I was never truly happy. I was always a victim. I was unable to love myself so how could I expect anyone else to love me?

The driving force that keeps me going when times get tough:

The driving force that gets me through is God. I also keep the pain right in front of me. I never want to experience what I did when I was in active addiction. I have a lot to lose today. The next thing that I would lose is more important than the next drink or drug. I am not willing to give anything I have in my life away.

Advice for the addict still struggling:

You are not alone. There is hope and a future. If I can recover, anyone can recover. You are not too far gone to receive help. You are loved and many people pray for you every day.

What obstacles or road blocks have you faced in your recovery?

Anger was one of the biggest things that I have had to overcome. I have many defects of character that have stood in the way. I have learned that unless I take the necessary steps to remove these defects and replace them with what God would have me be, I will continue to experience these roadblocks until the problem within myself has been eradicated.

What is something you want people who never struggled with addiction to know?

It was not my dream as a child to become a drug addict. I may have made the choice to drink or to use a substance, but it wasn’t my goal to destroy my life. I didn’t know that my body would react differently to alcohol and drugs. I do not have a normal reaction. It is like someone with an allergy. The person doesn’t know they are allergic to something, unless they ingest the food or are stung by a bee, etc. There is a solution and recovery is a lifelong process.

What advice do you have for family members of a person in addiction?

It is not your fault. There is nothing that you could have done to prevent your loved one from becoming addicted. Please do not enable the loved one in active addiction. Addicts need tough love sometimes. They need to be loved back to life and not loved to death. Let them experience what they need to experience with the consequences of their actions to want to change. Pray. Pray for them more than you have ever prayed for anything. God has the final say. As long as they are breathing, there is hope. Attend Al-Anon meetings or other family support groups.

I am still a work in progress. God isn’t done with me yet. I am blessed that I am able to give what was so freely given to me. I am living proof that recovery is possible. I was once hopeless and an unlovely creature. Today, I let my soul shine. I wouldn’t change one thing about my past, because it has made me who I am today. I believe that I am blessed and highly favored. I am enough for God and that is all that matters today. My sobriety date is 11/24/2010 and that is the day I was reborn.