As of last week, 5,500 people had filled out applications

Craig Bouchard has only to look outside the window of his downtown office in this northeastern Kentucky city for motivation.

Ashland is a shell of what it used to be. But if Bouchard has his way, that will change.

Bouchard, chairman and CEO of Braidy Industries, is leading an ambitious initiative to build a $1.3 billion state-of-the-art aluminum rolling mill in an area that hasn’t had positive economic news in almost 30 years. In less than two months, Braidy plans to break ground on a greenfield rolling mill that is named after one of Bouchard’s six children.

For people in the northeastern Kentucky area, news of hundreds of high-paying jobs has restored hope.

“We chose here because of these families,” Bouchard said. “We’re taking on that job and I think we’re going to succeed. These people have been pushed around long enough. I feel the weight of these 10,000 families on my shoulders every day. This crowd in Ashland, they’ll do it.”

Bouchard’s sparkling new office, located on the refurbished third floor of a bank building, already has some local roots in it. A print given to him by Gov. Matt Bevin hangs on one wall. A photo of Greenup County High School’s national championship cheerleaders is framed on a shelf along with books from local authors. 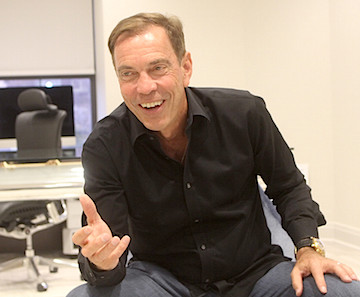 Before he knew much about the area, he heard of the 16-time national championship squad and decided, if the people there have that kind of discipline and determination, they have what it takes to succeed.

And there’s this: his wife, Melissa, is a former tennis player for the University of Kentucky. So, some Big Blue is in the family, too.

Bouchard immediately got everyone’s attention when he announced that the plant would hire 550 workers with starting pay of between $50,000 to $70,000 annually – about twice the median income in the area – with benefits, a fitness facility and a day care. As of last week, 5,500 people had filled out applications, some coming with personal appeals, including one from a grandmother pleading to know how her grandson could become an employee.

Another 1,000 local laborers are expected to be part of the plant construction over the next two years. Braidy hopes to be running by 2020 and have already sold 160 percent of the product, which will take them into phase two of a plant that will eventually produce more than 900,000 tons of aluminum annually.

But Bouchard, 64, said his plant’s employment won’t be the end of it. Other satellite companies – at least 10 – are already talking about coming, he said. The ripple effect could create thousands of additional jobs in an area that has taken some punches.

Once an employment hub, the Ashland area has lost thousands of manufacturing jobs, especially in the last 20 years. In 1998, Ashland Oil relocated to northern Kentucky. Two years ago, AK Steel laid off 600 workers. Last year, CSX Railroad sliced 100 jobs because of reduced traffic from the coal mines.

Last March, during the final hours of the 2017 legislative session, lawmakers approved the Bevin administration’s request for a $15 million incentive for what was described at the time as a mystery economic development project.

About a month later, Bevin announced Braidy Industries would be building the massive aluminum rolling mill. The $15 million was transferred to Commonwealth Seed Capital, a limited liability company that’s owned by the state and is listed as one of the shareholders. Commonwealth Seed Capital invested the money in Braidy Industries but has the option to sell its shares back to Braidy if the company fails to start building the mill by June 30, 2018, or if Braidy doesn’t invest a minimum of $1 billion in the mill by June 30, 2020.

Northeastern Kentucky competed with 23 others for the rolling mill and the logistics favored Ashland, largely because of its skilled workforce, and Kentucky’s tax incentives along with low-cost electricity. But if Gov. Bevin had not signed right-to-work legislation in January 2017, the plant would have gone to someone else, Bouchard said.

The state has agreed to potentially provide more than $12 million in tax incentives to the company. Up to $10 million of those incentives are tied to hitting job numbers and wage targets over a 15-year period. The other $2.5 million in incentives is meant to offset taxes on construction materials.

It would not be wise to confuse Bouchard’s affable personality with his business persona. He likes to say kindness doesn’t mean weakness.

“Some people try to take advantage of me because I like to say yes and I like to help,” Bouchard said. “But it’s the wrong image in my opinion that I’m a very kind person. But as the general (Blaine Holt) would tell you, you shouldn’t confuse kindness with weakness because I’m not a very weak person in business.”

He learned the business through derivative trading and has recruited management teams that have built three billion-dollar companies. He clearly expects Braidy to be No. 4. The shrewd businessman has won three highly visible hostile takeovers. He and his younger brother, Jim, bought a bankrupt Chicago steel company in 2003 and in five years turned Esmark into the nation’s fourth-largest steel conglomerate, selling it in 2008.

It was sold it to Russian steelmaker Severstal shortly before the stock market and steel industry crashed and thousands were laid off. Bouchard said he wanted to sell a partnership stake to an Indian company, Essar Steel, that would have cleared debt.

Bouchard resigned from the board of directors of Real Industry Inc., an aluminum mill in Chicago, in August 2016 because of a “difference in opinion with some board members over the company’s future strategy” even after the company had grown from $40 million in revenue to $1.5 billion.

“It was an easy decision for all,” he said. “They pursued their strategy and I chose to build an aluminum mill in Ashland, Kentucky.”

Bouchard said his success has come from his ability to recruit superior management teams. Braidy’s executive management team includes retired military personnel and veterans of the steel industry, like Braidy Executive Vice President Tom Modrowski, who has 38 years of experience in metal works and will direct the design, installation, setup and subsequent management of a plant that produces nearly 900,000 tons annual of exposed coated metal sheet product.

Alan Blankshain is the executive vice president of Engineering for Braidy and a 24-year veteran of various senior operational and management positions.

“Nobody here has planned for second place,” Blankshain said. “We fully expect this to be the highest quality facility in the United States.”

It will be the first new aluminum mill built in almost 30 years. “It’s great to have a collaborative team here,” Blankshain said.

The management group wasn’t sure about the northeastern Kentucky area at first glance, he said.

“We were here on a foggy day and couldn’t even hardly see what we were looking at,” he said. “The Ashland Alliance came back with a workforce study and how there were 300,000 people within an hour’s drive, so we took another look.”

So far, Bouchard has hired 20 management executives for the third-floor offices that were built in 90 days by J&J General Maintenance Inc. There are 14 offices and the company is leasing the floor above that will include 25 offices. The number of workers in the headquarters will rise to 65 in the coming months.

The new office has a bright, cutting edge look to it with plenty of space and includes what Braidy calls its “War Room” with several enormous screens around the room, all churning statistics throughout the day about the aluminum industry. He has hired three retired military officers to operate the War Room, which is designed like the ones the military uses, to follow every move of the competition through drone technology, social media monitoring, the internet and the dark web to secure information now naked in the public domain.

The company is going to customers and asking them exactly what they need and fitting the new plant to those desires and specifications.

Brigadier Gen. (ret.) Blaine Holt, a 30-year veteran of the U.S. Air Force, is the Chief Operating Officer and general strategist for the company. Navy Captain (ret.) Dave Shealy runs the War Room along with Col. (ret.) Curtis Carson, a senior VP and head of human resources, who has expertise in training design and strategic planning.

“We’re going to change the world, absolutely rip the cover off the ball,” Holt said. “We’re not going to do it with swagger or arrogance but be humble and hungry. That’s what it takes to be on the Braidy team.”

They meet every Wednesday in the War Room, either in person or via technology, to glean the statistics and talk strategic maneuvers. “We do competitive analysis better than any company I’ve ever seen,” Bouchard said. “It’s thorough and web-driven. Our military leaders brought intelligence-gathering skills my previous companies didn’t possess.”

Julie Kavanaugh, the chief of staff for administration, has more than 30 years of experience in her field. She has been Bouchard’s executive assistant for 3 ½ years, making all of his travel plans as he jets around the world. She spent several years as an administrator with the Chicago Blackhawks and sometimes, on special occasions, pulls out her 2010 Stanley Cup ring, like when she met Bouchard. “It’s a good conversation starter,” she said.

Kavanaugh’s first job with Braidy was to oversee the design and completion of the corporate office in 90 days.

Braidy Industries goal is to become the nation’s leading producer of high-quality aluminum for the auto industry and of ultra-high strength alloys for the aerospace industry.