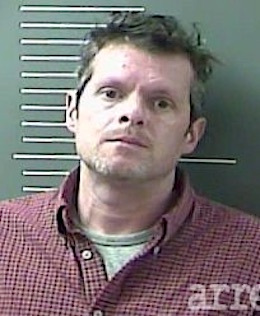 Johnson County was rocked Saturday afternoon, and into the evening, after a local man, who was a convicted felon with a prior criminal history consisting of numerous DUIs, public drunkenness, drug possession, and other offense charges, apparently snapped for as yet unknown reasons, ending with him shooting and killing four people at two separate scenes, 3 females and 1 male, before turning the gun on himself and committing suicide.

Just as the heavy rain was pouring down last night, the bloodshed just as heavy in this tragedy. As a result, this horrifying act has become the worst criminal incident in the long history of Johnson County, becoming the first mass murder ever in the county (and also one very rare few ever in Eastern Kentucky)

According to an initial press release, followed up several hours later by a press conference, the whole brutal crime spree began when at 3:33 P.M. on Saturday, February 10, 2018, Paintsville 911 received a call concerning a shooting at McKenzie Branch Road, off KY-172, in the Volga community of Johnson County near Flat Gap.

Upon receiving the call, 911 dispatch contacted Sheriff Dwayne Price. Sheriff Price responded to the call. Upon arrival at the residence in McKenzie Branch at 3:40 P.M., Sheriff Price met with Deputies Byron Fairchild and Jesse Mullins. It was discovered that two people had been shot, a man and a woman, and that both were deceased in the kitchen.

Sheriff Price then notified Kentucky State Police Post 9 in Pikeville for assistance, and requested a detective to the crime scene. The shooting suspect was not there, and a search needed to be coordinated.

According to a witness, who was able to give an identity of the perpetrator to police, said that the shooter had left the scene in a black Toyota Camry. Sheriff Price put a BOLO out on the Camry.

Sheriff Price, Johnson County Deputies, along with Paintsville PD and the Kentucky State Police began a coordinated search of possible locations. Other counties were also advised to be on alert. The suspect was to be considered armed and dangerous. An alert was then sent out to multiple counties to look for a Camry (the car the suspected shooter left in).

State troopers at KSP Post 13 in Hazard, KSP Post 9 in Pikeville, and KSP Post 14 in Ashland were alerted via police scanners to be on the lookout for the suspect who may be driving a black Toyota Camry. They also say he should be considered armed and dangerous.

While canvassing the area, 911 received a tip that the subject’s vehicle was on Mill Street in Paintsville. All agencies responded and located the vehicle. Sheriff Price led a search of the apartment complex. An apartment was located that had the bodies of two additional victims, both of whom were females, and also the shooting suspect, identified as Joseph W. Nickell, 44, of Flat Gap. All three were deceased.

At a late evening press conference near the second crime scene, Sheriff Price stated, “This has been a horrific murder spree. The lives of four innocent victims were taken. The perpetrator then took his own life. There are no words to describe the heartbreak in seeing four lives taken due to the actions of one man. I have worked in law enforcement for 34 years. This is one of the most disturbing acts of violence I have ever seen.”

Sheriff Price further stated “We will continue to work this case in conjunction with the Kentucky State Police. I ask for prayers for the families.”

Sheriff Price concluded the press conference by saying, “In respect, for the victims, we are not releasing any names pending notification of families.”

Meanwhile, the alleged murder spree suspect, Joseph W. Nickell, had an extensive criminal record in Johnson County, where when between February 6, 2009 thru July 31, 2013, Nickell was arrested 10 times, most of them by the Paintsville Police department, on 23 criminal charges, including 6 DUIs, numerous drug possession charges, as well public intoxication and other misdemeanor offenses.

On February 13, 2015, Nickell was arrested by the Paintsville Police Department on the charges of • ALCOHOL INTOXICATION IN A PUBLIC PLACE (1ST & 2ND OFFENSE, • ASSAULT, 4TH DEGREE (DOMESTIC VIOLENCE) MINOR INJURY, and • FLEEING OR EVADING POLICE, 2ND DEGREE (ON FOOT).

Nickell’s last 2 arrests were on January 25, 2017 for alcohol intoxication in Ashland, Ky., and October 27, 2017 when he was arrested by the Johnson County Sheriff Department on a bench warrant from a police agency outside of Johnson County.

The incident remains under investigation by all law enforcement agencies that responded to the homicide case scenes.

1,300 HAVE ALREADY APPLIED FOR ENERBLU'S 875 JOB FACILITY IN PIKEVILLE