1,300 HAVE ALREADY APPLIED FOR ENERBLU’S 875 JOB FACILITY IN PIKEVILLE

EnerBlü’s December announcement that it would be bringing its battery manufacturing facility to the commonwealth created a boom of interest for Kentuckians — current and former — who are looking for a chance to put their skills to work.

According to EnerBlü President and CEO Daniel Elliott, his company has received more than 1,200 applications since the City of Pikeville hosted its economic development announcement at the East Kentucky Expo Center.

Elliott said the company has identified two potential buildings for its Lexington location, which will begin operating while the Pikeville structure is under construction and will serve as a corporate office for the company. Elliott said negotiations are currently ongoing, in terms of finance, power and spacial issues. But, he added, the Pikeville location is still very much a priority.

“We are — and have been for the last month — in pretty detailed engineering meetings,” said Elliott. “The engineering (for the Pikeville location) has been progressing forward and we are, I think, pretty close to deciding on a design-build firm to work with, anticipating that we will start to break ground in the spring.”

Elliott said there isn’t a concrete date for construction at this point but, he said, interviews for positions have started.

“We have started interviews for people from Kentucky. We’ve got about 1,200 or 1,300 applicants at this point, from all sorts of different disciplines,”said Elliott.

He said applicants for several different positions have applied: From environmental heath safety to sales and accounting. 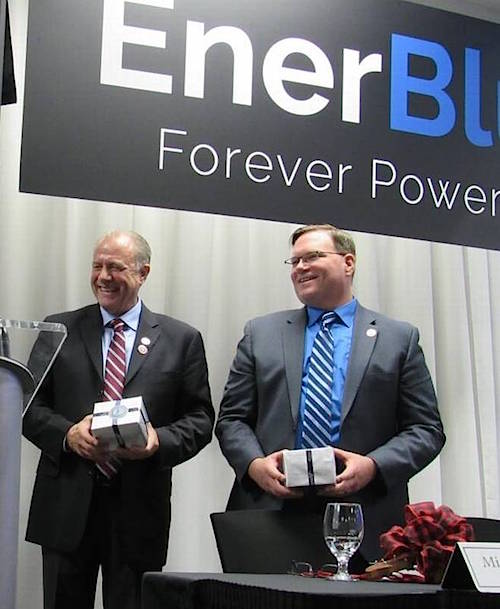 “I’d say probably about 1,100 of those applicants are from the Pikeville area or the Eastern Kentucky region,” Elliott said. “We have a lot of applicants that are wanting to go back and a lot that are still there. But, a lot of them actually, are living elsewhere and saw this and said they wanted to get back to Pikeville — to where their hometown is, where their family is.”

He said interviews are underway and he encourages anyone who applied, but hasn’t heard back, to “hold on.”

“It’s a process, but we’re currently interviewing and are anticipating starting to make some hires,” he said.

He said he has found a home in Lexington and is “shopping for one in Pikeville,” because he plans to have a home in both cities. He also said many of EnerBlü’s executives have already made the move to the commonwealth.

“So, there are several of us now that are moving,” he said. “And our facility out here in California is actually for sale. We listed it because we are going to move out of this completely and move everything. The target is: We would be fully operational a few months from now, in Lexington, while we work on the design-build plans for Pikeville.”

Elliott said there will be a delay in bringing the major equipment from the current EnerBlü base in South Korea.

“We are going to leave the equipment in South Korea for now, have it produce cells, and bring those cells over to Kentucky where we will build the packs and systems,” said Elliott.

According to Elliott, moving the major equipment right away would not be sustainable for the demands of EnerBlü’s already over-extended output plans.

“It’s going to put us way behind,” said Elliott. “So, we will do the training first and the work first on the system level … because we have orders outstanding, right now, for those systems. So, those are the positions we’re interviewing for right now primarily: For welders, fabricators, some in the electronic engineering space.”

He said the company is currently reviewing applications and looking into universities for these specific types of workers, but added that the current applicants have more than exceeded expectations.

According to Elliott, EnerBlü has received investment interest from another power company, outside of American Electric Power. He said this interest shows the potential for the EnerBlü’s product, but also shows a validation for Eastern Kentucky’s workforce.

“We are really getting high-quality people. It’s everything from their experience set, their background and their training, but also how they present themselves. They’re taking time to write very thoughtful introductory letters, or cover letters, as they’re uploading them onto our website,” Elliott said. “The vast majority of what we need — I would say 95 percent or more — of what we’re going to need is going to come out of that East Kentucky region. We’re really getting good, quality applicants.”

Elliott said the ONE East Kentucky workforce study was a major selling point for EnerBlü.

“Chuck Sexton and ONE East Kentucky presented to us the research that they had done, and presented to us on what the workforce was — or should be,” Elliott said. “In fact, it’s as good as they said or even better, frankly. We are really seeing high-quality applicants … it’s refreshing to see.”

According to Elliott, the EnerBlü team is excited for this move and all the challenges involved. He said the building process may be a battle, but he wants to encourage the community not to let a lack of current structure give them the wrong idea.

“We’re putting up what I would call a pretty heavy building on that site. So, there’s some mitigation work that needs to be done, but it’s all doable and something that we’re picking the challenge up,” Elliott said.

Elliott said nothing about the project has swayed the company against its decision to locate in Kentucky.

“In fact, it’s rather the opposite,” he said. “We’re more emboldened and encouraged today than we were when we announced this thing a month ago.”