Water district has more than $650,000 in delinquent bills… 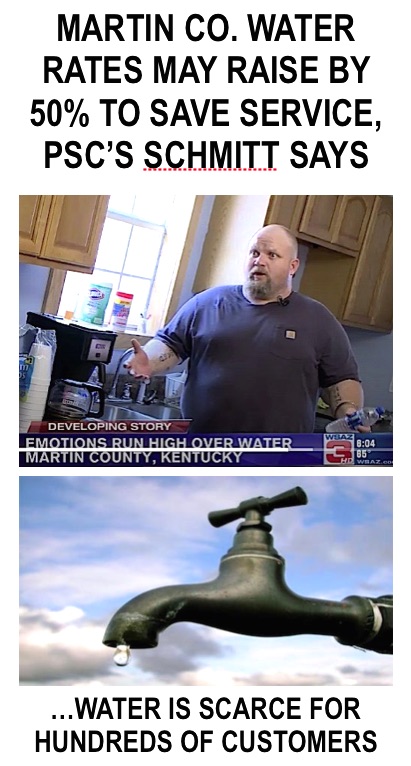 Representatives of the Martin County Water District described a system on the verge of financial catastrophe at a state hearing Friday, saying the district would effectively collapse within 60 to 90 days without an immediate influx of cash.

Kentucky’s Public Service Commission, the state agency that regulates most utilities, held a hearing in Frankfort to consider the district’s application for an emergency rate increase of nearly 50 percent for its 3,500 customers.

Without additional revenue, the district will soon miss payroll and “when we do, all our employees will quit,” said John Horn, chairman of the Martin County Water Board.

The Eastern Kentucky water district made headlines recently when it shut off water to thousands of customers for days, or in some cases weeks, when an intake pump and service pipes froze during frigid weather earlier this month.

“This is by far the worst water district, in my opinion, in the state of Kentucky,” PSC Chairman Michael Schmitt said during Friday’s hearing.

Schmitt warned that if the district does not right itself soon, the commission will put a receiver — an outside agency or utility — in charge of day-to-day operations, or force a merger with a nearby utility.

More than once, Schmitt suggested a merger with a nearby utility as a possible solution, saying that providing consistent water access is the ultimate goal, regardless of which utility provides it.

The district for years has lost more than half of the water it treats through leaky pipes and tanks. In 2016, the water-loss rate reached 64 percent.

The district’s last rate increase in 2011 of about 15 percent came with an additional commission recommendation to create a monthly surcharge to pay for repairs of the leaky pipes and tanks, but that recommendation was ignored.

Officials said the district has already cut costs, including limiting electricity use and non-essential purchases.

Former PSC Chairman James Gardner, who also spoke on behalf of Martin County Concerned Citizens, said that if the commission approves an emergency rate increase, it should also instill accountability measures to record how the district spends money from the increase.

In interviews earlier this week, some Martin County residents opposed the increase, saying the district could not be trusted to spend money responsibly.

The district’s water board includes four new members who were appointed about two weeks ago, after four previous members quit.

At the end of the hearing, Schmitt compared the new water board to a surgeon, and the water district to a patient who has been shot, run over by a truck and is in desperate need of saving.

“I hope you can do it,” he said. “We’re going to give you a reasonable chance to do it.”

The commission will make a decision about the district’s emergency rate increase request in coming days.