Fletcher says he ‘would hate to lose’ NTI days

The program that allows Kentucky’s public school students to learn from home on snow days apparently needs an overhaul and would end in its current form within three years under a proposal approved by a Senate panel Thursday. 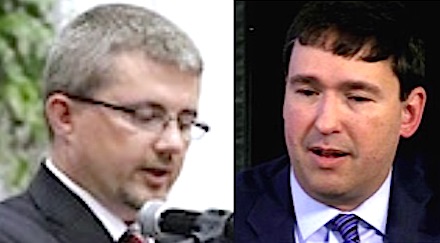 About 75 of Kentucky’s 173 school districts participate in the program, commonly known as non-traditional instruction program or NTI. But state Sen. David Givens, R-Greensburg, told the Senate Education committee Thursday that rigorous learning is not consistently provided in school districts throughout the state on those days and the program should be revamped. Kentucky Education Commissioner Stephen Pruitt said he agrees with him.

“The challenge we face … is we have such disparities across the Commonwealth,” said Givens, “We have some districts that are doing it largely technology based, really succeeding in 2 1/2 to 3 hours a day educational experiences for these students. Sadly enough though, we have other districts that are mimeographing two or three pages, sending those copies home and counting that as an educational day for that district.”

Senate Bill 73, sponsored by Givens, calls for NTI to end in 2020-2021. Currently, the Non-Traditional Instruction Program requires academic instruction on days when school would otherwise be canceled. Although school buildings are closed, school districts create plans to deliver instruction to every student in the district and arrange for students and teachers to interact on NTI days, with the ultimate goal of continuing learning. The Commissioner of Education can waive up to 10 NTI days to count towards student attendance days in the school districts’ calendars which means they don’t have to be made up.

“…At the request of KDE, we have presented at workshops as a NTI implementation model for other districts.

Also, NTI assignments are included in each student’s grade for each class. At no time did we take the approach that an NTI day is just a make-up day. It is our goal to provide a quality day for students, but we also know we can improve. As a result, I believe that NTI days have better equipped our students to navigate the hybrid and online settings that are now required in college classes. In short, I would hate to lose this opportunity for our students.”

Under the bill, “my goal here is to sunset what I consider a pilot project at the end of three years,” said Givens. Givens said that during that time, if districts have good models to share and the Kentucky Department of Education department led by Commissioner Pruitt is “willing to help us create consistency and rigor across the Commonwealth for what non-traditional instructional days should look like, I’d love to sponsor the bill that puts it back in place to say … this is what it should look like,.”

“This chance will provide us the ability to get it right, consistent and with rigor,” Givens told the Herald-Leader.

“I believe it is time to revisit this initiative,” Pruitt said. “I realize it has been both popular and needed by many districts. However, the next iteration must evaluate the quality of the experience as well. I look forward to collaborating with Sen. Givens as we move forward with this work.”

Even though Givens has concerns about the snow day program as it currently is implemented, he said he was a huge advocate for technology-based learning and that there’s no better place for students to experience self-directed online learning than in a public school setting.

“Senate Education Committee chairman Max Wise, R- Campbellsville, said he was concerned that when students did not finish the work given to them on NTI days, they were taken out of class and moved to another room to finish it when they returned to school.

“I find that also disheartening that we are pulling children, once they get back into school, out of the classroom ….and they are missing that class time also,” Wise told Givens.

As lawmakers discussed the bill in Frankfort, several Kentucky school districts had canceled traditional classes on Thursday and for the last few days because of winter weather. This year, Fayette County has canceled school four days, dismissed classes early one day and on Thursday, started the school day two hours late. In 2016, the Fayette school board voted to apply for the state’s NTI program. But after studying the issue, officials had concerns for the 4,600 students who were considered special education students or English language learners who would need additional assistance on those days.

There are no plans for Fayette County to reconsider that program.

Another provision in Senate Bill 73 allows school districts to establish a pilot program for teachers to develop a professional development project, which is designed to improve student performance.

The bill was approved unanimously by the Senate Education Committee and now goes to the full Senate.