FACES OF HOPE: WE DO RECOVER …Meagan Helton’s story 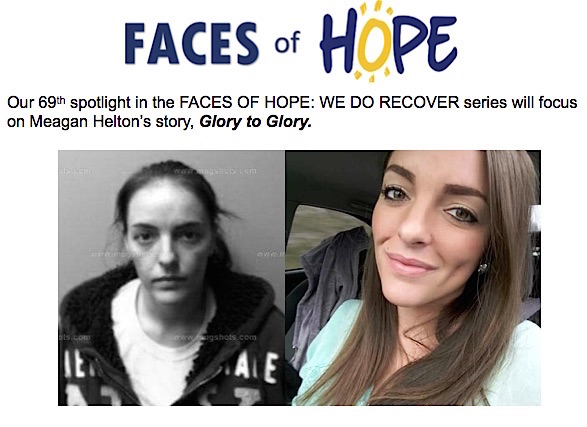 I was born July 21st, 1989 to a loving family with two older siblings. One of my earliest memories was sitting in a church basement, in a classroom, giving my heart and soul to Jesus. Little did I know, that was the best inheritance that my parents could have ever given me. As a small child I lived in the “white picket fence” world. The hard working father, the “Betty Crocker” mother, the suburban home, vacations. Life was good. My father decided to move the family out of the city and to a more rural area to give us a better chance in life. We moved north into a small town with little options as a Christian family. The enemy crept in and destroyed my mother and fathers marriage. I was very young and it impacted my life in such a negative way. I remember feeling different. Less than. Not good enough. I’m not sure if these feelings stemmed from trauma or if I were born this way. All I know is I wanted to fit in. At 13 I took my first drink of alcohol. It made me feel alive, like I had reached my destination. I drank way too much that night and ended up vomiting on myself, blacking out and passing out. The next day when I woke up, feeling very ill, I knew I was going to drink again.

I didn’t use any substances for the next few years until at age 15 I smoked my first joint. It took me to another level. I fell in love with marijuana. I became very combative in school, not really caring about grades or sports or even attendance. I was placed on truancy probation and I didn’t care much about that either.

My mother was a single mom trying her best to raise my sister, my brother and I with a dead-end, minimum wage job. I skipped out on classes and smoked marijuana every chance that I could. My brother and sister moved out that year and my mother decided to move her and me to Kentucky to give me a second chance. Both she and the judicial system thought this was my way out.

In 2005 I snorted my first pill. It made me so sick that I stayed away from them for the time being all the while I continued to drink alcohol and smoke weed for a few more years.

In 2009 I was a passenger in a drunk driving accident. I was rushed by aircraft to the University of Kentucky hospital with several injuries and was placed on a morphine drip. I was released from the hospital after 8 days, unable to walk due to a broken femur bone, with a prescription of narcotics. I had no idea what was about to happen. The prescriptions stopped. The mental and physical obsession began.

For the next five years I bought and sold oxycodone, heroin and any other substance I could get my hands on. I robbed, begged, and borrowed anything I could. I was in and out of jail. I lied, cheated, and manipulated anyone that I came into contact with, including my nearest and dearest family and friends. I got pregnant in 2011 and gave birth to my son in 2012. Only by God’s grace he wasn’t born addicted and he wasn’t taken from me that day.

When my son was 6 months old I gave him to my mother to take care of. Social services stepped in and started random drug tests. I couldn’t stop using. I felt like there was no way out. I was selling my body for drugs. I was sleeping on couches at places with no electric or no water, sometimes both. I started IV using. I was so mentally and physically dependent on drugs that nothing was unacceptable. I didn’t want to live anymore but I was too afraid to die. I was completely hopeless and I honestly thought that I would die this way.

After losing everything, including my morals, I hit my knees and cried out “GOD, HELP ME!” He heard my plea! In 2012/2013 I was charged and arrested on a receiving stolen property charge/firearm. I didn’t know at the time but this was my help. In dealing with family court and circuit court, they came to the conclusion I needed treatment. I still used for the next year dodging my probation officer and the judge. Until one day I had had enough and told my probation officer, “I’m done. Get me help please, or I’ll die!”

September 1, 2014 I was sent to the Brighton Recovery Center for women in Florence, KY. I was broken from the inside out. I surrendered. Whatever was put in front of me, I did. Whatever was asked of me, I did. Little by little each day I found a new sense of hope growing inside of me. I prayed every day, numerous times a day. I watched others as they grew in their recovery. I watched their family be restored. The smiles on their faces were genuine. They picked me up when I was down. My peers loved me back to life. I firmly believe wholeheartedly that God placed each person in my life to help me grow. I learned how to cope with the mess I can be at times. I learned how to cope with life controlling issues. I learned who I was. I began to see what was acceptable and what was not. I learned true love and grace. I graduated the program.

When I came home after 13 months of being in treatment I wrote an appeal to regain custody of my now 2 year old. I was granted that! The state of Kentucky declared me a fit mother! Mind you I was the same person who did all the horrific things a year and a half prior to this! That is the promises and that is grace. I became an employee. I started going to church and joined a rising recovery program called REwired. Through REwired I heard about a career opportunity with ARC. I put in an application, submitted my resume and was hired! I now get to give back what was freely given to me. I get to see families restored. I get to see children hug their sober mothers. Parents hug their sober daughters. I get to share my experiences. I get to be an example of what God and recovery is about.

January of 2017 I lost my mother to cancer. That was one of the hardest things I’ve ever had to deal with. She raised my son when I didn’t and when I couldn’t. She was my biggest supporter. When everyone else gave up on me, it was her and God still believing in me. When she was laying on her death bed she looked at me and told me how proud she was of me and that she could leave this world knowing that I would be ok. She told me that not just my sobriety, but my relationship with God, was her peace.

Today I’m able to help others. I can love and give without expecting anything in return. I get to make a difference. I’m surrounded with people on the same mission. Every day is an adventure to me. I learn more about who I am each and every day. God has continued to move in my life and restore me. I get to be a wife. I have 2 healthy boys that I get to be a mother to. I have a home (with electric and water). I have a family not just with my church but with Addiction Recovery Care. I’m blessed!

What was your aha moment?

My aha moment was when I saw that other women just like me were sober and being restored.

Advice for the addict still struggling.

You’re worth it. Just surrender. Put out willingness and God will shower you with grace. Recovery is possible.

What obstacles or road blocks have you faced in your recovery?

What is something you want people who never struggled with addiction to know?

We need support. We aren’t garbage. We are people.

What advice do you have for family members of a person in addiction?

Don’t enable your loved ones. Seek help for yourself. Get a support system.

I didn’t have to chase drugs today. I thought that I was going to die using. It was only a matter of time. The same God who loves me when I’m praising Him in church is the same God who loved me when I was sticking a needle in my arm. I am so grateful for every little thing that comes and goes. There was a time where I hated everyone and everything because I was in a bottomless pit. God isn’t done working on me and He isn’t done working on the next person that is asking for His help. God is moving me from glory to glory!