…and boosts maternity and paternity leave

“Walmart is boosting the minimum hourly wage for its U.S. employees to $11 and dishing out bonuses of up to $1,000, crediting President Trump’s tax cut for enabling the move,” Nathan Bomey reports for USA Today. The corporate tax rate will drop from 35 percent to 21 percent under the new law. Walmart is the nation’s largest private employer with more than 1 million hourly employees in the U.S., and has a heavy presence in rural America. 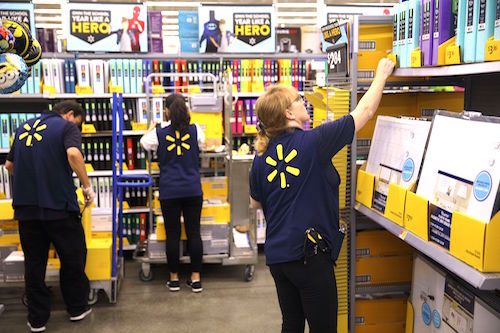 Big changes are also coming for Walmart employees who are welcoming a new baby. “The company is also boosting its paid maternity leave policy for full-time hourly workers to 10 weeks at full pay. Previously, birthing mothers got six to eight weeks at half pay,” Bomey reports. “Walmart is also increasing its paid leave policy for new fathers and non-birthing mothers to six weeks at full pay for full-time hourly workers. Previously, the company didn’t offer any paid leave for them.”

The company will benefit from looking more attractive to workers, since unemployment is at a 17-year low, meaning other companies could woo away dissatisfied or potential Walmart employees. University of Michigan business professor Erik Gordon told Bomey that “Walmart would have had to go to at least $11 in many markets in order to retain reliable employees [but] the tax cut made it easier for the company to swallow.”

The move shows that Walmart is betting on solid economic growth for the next few years, according to Charles Fishman, author of The Wal-Mart Effect. He also told Bomey that it meant that Walmart recognized that it needed to treat their employees better because “they can’t take them for granted anymore.”

The minimum-wage hike will take effect in February. The one-time bonuses will cost the company $400 million and will be based on the length of service. Most will get up to a few hundred dollars, but employees who have worked for at least 20 years will get the full $1,000.

Local Wal-Mart manager Marty Bishop did not comment on raises or bonuses at the Louisa store.