The Kentucky Public Service Commission (PSC) has ordered for-profit utilities to track their savings under lower corporate tax rates that took effect yesterday, paving the way for those savings to be passed on to customers in the form of lower electric, gas or water rates. 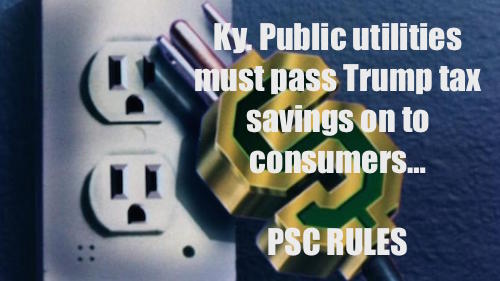 “Since ratepayers are required to pay through their rates the tax expenses of a utility, any reduction in tax rates must be timely passed through to ratepayers,” the PSC said in the orders.

The orders direct the affected utilities to begin tracking their savings from the immediate reduction in the corporate tax rate. The PSC also ordered the utilities to calculate the excess amount of future tax liabilities that they are carrying on their books and that will need to be refunded to ratepayers.

One of the two orders is in response to a complaint filed by the Kentucky Industrial Utility Customers (KIUC) an organization that represents large electric customers in rate cases and other matters before the PSC. On Dec. 21, 2017, KIUC filed a complaint arguing that the rates of four utilities would no longer be “fair, just and reasonable,” as required by law, once the federal tax cut takes effect.

“While the exact amount of the tax savings and resulting rate reductions cannot be determined with precision at this time, each of the (companies) should use its best estimate to determine the amount to be recorded…subject to review and adjustment as part of this case,” the PSC said.

The second order also directs those utilities to submit, within 30 days, testimony on the impact of the federal tax cuts on their finances and to propose new rates reflecting the tax reductions.

The four utilities cited in the KIUC complaint are not being told to file such testimony since they must respond to KIUC’s proposed revenue and rate reductions. KIUC estimated that the tax cut would lead to rate reductions in the range of 4 percent to 7 percent, depending on the utility.

In total, more than two million customer accounts could be affected by rate changes resulting from the corporate tax reduction.

A procedural schedule in each case will be set by the PSC at a later date.

UPDATED: JOBE SAYS MOTOR VEHICLE COMPUTERS BACK UP AND RUNNING