FACES OF HOPE: WE DO RECOVER: Caitlin Fannin’s story, Empty to Overflowing 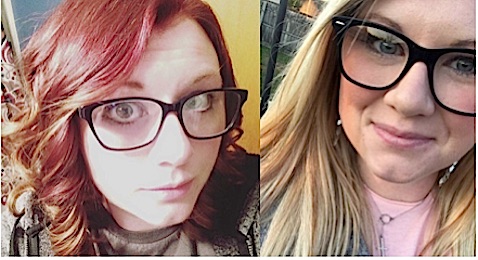 Our 65th spotlight in the FACES OF HOPE: WE DO RECOVER series will focus on Caitlin Fannin’s story, Empty to Overflowing.

I never pegged myself as one who would become an addict.  Not only to go through addiction, but end up in rehab, complete rehab, and end up in an abusive relationship.  I just had better plans for myself…we all do.

I grew up with two loving parents.  However we never know what someone is going through, and I lost my father to suicide when I was 15.  It was a tragic and sudden loss, but it didn’t stop me from wanting to succeed in life.  My life after losing my dad isn’t what some would assume, I surrounded myself with people and pushed to not become another statistic and I succeeded for quite some time after that.

In 2006, I gave my life to Jesus.  Of course, being 16, I didn’t completely surrender my whole life and what I had done was only scratching the surface.  I continued to live my life for myself and what I wanted.  I became consumed in relationships and ended up drinking my first “beer” when I was 17 years old.

In late 2013, I became involved with a man who was in recovery.  Some of my family members had suffered from addiction, but I was completely naïve to the entire topic.  I was always taught to just stay away from all of it.  My mother thought that telling me and seeing what members of my family had to go through would be enough to keep me away from it…it didn’t.

In 2014 I had a miscarriage.  That was probably the lowest point of emotion I had ever felt in my whole 27 years of being alive.  Losing a baby is not a feeling I would wish on my worst enemy, but still pushing to not become another statistic I started taking Zoloft and attempting to deal with the loss. After my miscarriage, the guy I met who was in recovery relapsed.  He started off messing with Percocet and eventually graduated to snorting heroin.  Not completely healed from my past, I had developed this “you only live once” attitude and snorted heroin for the first time in 2015.  That first line made me sick and I said I’d never touch the stuff again…that was a lie.

I was what you would call a functioning addict.  People would look at me and just think that someone like me would never end up on dope and that’s what made me successful at it for almost a year. Let me tell you, addiction knows no prejudice.

On May 21, 2016, I was tired of relying on it to live.  I broke the news of what I had been doing to my mom in a text message.  On May 23, 2016 she and Leon Heaton had convinced me to go to Karen’s Place on one stipulation, I could leave after seven days.  So, I went.  On day seven, I called my mom and she told me if I left she was going to the courthouse and filing Casey’s Law.  Knowing I didn’t have what it took to stay away from the madness and that I would end up right back to where I was, I stayed.

Karen’s Place was one of the best things that could’ve happened to me.  Not just to help get me clean, but it helped me grow and learn who I was and who God is.  I learned knowledge from that place that I still carry with me over a year later.  Has my life been rainbows and butterflies since then?  Of course not, I’m still flesh and earth is still filled with sin.  I ended up in an abusive relationship shortly after Karen’s Place and I relapsed.  I ended that relationship, by the grace of God, after EIGHT months and I ended up drowning myself in alcohol and sex.

September 3, 2017 was the last time I ever picked up a beer.  Not knowing I had more to surrender, I started there.  I knew that if I genuinely wanted my life to flourish and my relationship with God to grow I had to.

Today, without the substances and without the empty relationships (because that’s what I was still holding onto) I have a genuine relationship with God.  I can’t describe the way my life has flourished in these past few months, but the things he has done to ensure his glory is seen has blown my mind.  Today, I have a genuine relationship with members of my family, I not only serve at my church, but I also am the captain of one of our serving teams, I co-lead a recovery outreach group, and God pushed me to go back to school to become a Substance Abuse Counselor.  The things I endured in my past were to get me to where I am today and to get me to where I’m going in the future.  I wouldn’t take back my journey for anything.

It would be my complete surrender moment.  I look back to try and figure out what took me so long to just give it all to Him, and I can’t figure it out.  We think surrender is such a difficult thing to do, but it’s actually not.  I’m so thrilled I don’t have to deal with the things I once had to deal with and that He fights my battles for me.

I was just trying to figure out how to fill the void we all have.  I knew something in my life was missing and drugs filled it for almost a year.

Driving force that keeps me going:

Remembering where I came from helps, but my biggest force is Jesus.  He has placed me in the perfect place in my life.  I’m surrounded by support groups and people who understand the things I’ve gone through and who help carry me through the tough stuff.  Only God can surround us with the right people.

Reach out to the resources.  We all know that we don’t want to live the way we do for forever.  We all think that we can’t do it, but I promise that you can.  Recovery is only hard for a little while, but it gets easier and you gain means of support through the process.

I have come to find out that the world is an evil place. There is temptation EVERYWHERE you go. Alcohol became a problem for me after heroin, even when alcohol wasn’t an issue for me before. Alcohol is used as such a social norm today, it’s hard to avoid, but that’s where The Word comes in and makes the temptation bearable. I first heard this verse in Karen’s Place and it has gotten me through more temptations than I can even tell you: 1 Corinthian 10:13-No temptation has overtaken you, except what is common to mankind. And God is faithful; he will not let you be tempted beyond what you can bear. But when you are tempted, he will also provide a way out so that you can endure it.

What is something you want someone who has never suffered from addiction to know?

No matter the awful things the addict does, there is still a God-made human being inside there somewhere.  We are all touched by addiction in some way or another, but know that whoever the addict is in your life, there is a person underneath all of the junk.

Advice for a family member of a person in addiction:

Casey’s Law is something that I swear by today.  I didn’t have to go through it, but it is such a life saving measure that I highly recommend any family member or friend to look into.  Casey’s Law is a law where a family member can go to a judge and have the person in addiction court ordered to rehab.

Also, you are not alone.  Like I said, unfortunately, we are all touched by addiction in some way or another.  There is also support out there for family!

There is a better way to live.  God has promised us a future and a hope.  You are not alone in your pain and suffering.  Please REACH out!

Jeremiah 29:11-“…For I know the plans I have for you,” says the Lord. “They are plans for good and not for disaster, to give you a future and a hope.”