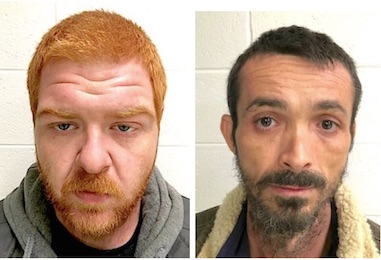 Clark is charged with Possession with Intent to Deliver Heroin after he made arrangements with a buyer to meet him at Spring Valley High School to sell him Heroin this past weekend. The WCSD Drug Enforcement Unit and road patrol deputies intercepted Christopher and seized appx 3 grams of Heroin.

Okie Corn was stopped by the WCSD Drug Enforcement Unit after leaving a known drug house in the Fort Gay area. During the stop, when the DEU made contact with Okie he still had Oxycodone in his hand and cash. A search yielded multiple baggies of marijuana packaged for distribution.

Okie is charged with Possession with Intent to Deliver x 2. Sheriff Thompson says the DEU has received tips that Okie Corn was selling drugs in the Fort Gay area.