The revitalization of reclaimed mine land in the Appalachian region has been one of the ways in which regions hit hardest by the downturn of coal production are getting back on their feet. The Kentucky Enterprise Industrial Park is one of those efforts. AppHarvest, according to city officials, still plans to be one of the pioneers at the park. 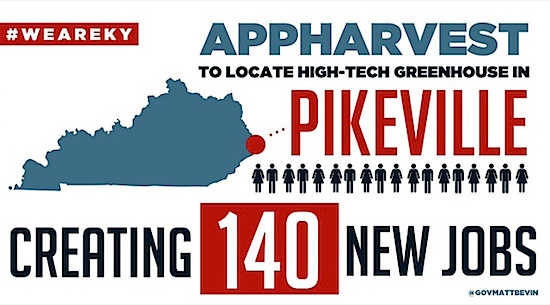 In June, AppHarvest founder and CEO Jonathan Webb hosted a roundtable discussion about his company’s intentions to build a high-tech greenhouse on the city’s industrial park. The factory for high-tech agriculture is slated to create approximately 140 jobs for Eastern Kentuckians. Webb said the main export of the greenhouse will be bell peppers and snacking tomatoes. However, at that time, Webb was still waiting to tie up some loose ends. Now, according to officials with the City of Pikeville, progress has been made.

“AppHarvest is still very much committed to coming to Pikeville. As a matter of fact, it’s an even bigger project than what it started off being” said Assistant City Manager Sean Cochran. “Initially, Jonathan Webb had a gand plan of building not only this green house, but several more throughout Eastern Kentucky — with this one being the first and being the hub for all of the others.”

The company announced in October that it has partnered with Sunset Produce, the leading greenhouse grower in North America, and is ready to move forward with its plan to locate in Pikeville.

“The project is 32-acres, under glass,” Webb told the News-Express. “Sunset Produce is dedicated to building five, high-tech greenhouses. But, we’ve got to start construction on this first one.”

He said the first step in the big picture is to get the first project up and running.

“We’ve been down in the weeds on ironing out the construction details,” he said. “The partnership with Sunset has been critical in helping to iron out those and setting us up for success in the long-run.”

Cochran said Sunset is a Canada-based company that is interested in making “huge expansions” with various greenhouses throughout the United States.

“While we were working with Jonathan, he brought Sunset into the deal,” said Cochran. “We had done a lot of work with Jonathan that we went through again with Sunset. And they are committed. They love the area and they love the park; they’re still coming.”

Cochran said the weather has played a role in the ability for AppHarvest to begin construction.

“Their construction would have needed to have started in October,” Cochran said. “What happens is, they put up all of the glass and then they add the heat that goes in.”

He said a nearly five-month construction process would take place prior to the company being able to heat the facility and the company could not chance the possibility of snow hindering that process.

“They can’t take the chance of having a large snow load on the glass, without having the heat in there to melt the snow,” he said.

He also said a crop input schedule dictates when the company will be able to plant its crops, meaning they will have to wait until that time to begin growing their product.

“They’ll be starting construction in the spring,” he said.

Cochran said this partnership with Sunset, while holding the process up a little longer, will be more beneficial to those who seek employment there.

“The pay scale now, bringing Sunset on board, is better. Jonathan’s pay scale way good for the type of labor he was needing, but Sunset’s works even better,” Cochran said. “It’s a higher per-hour pay rate and they also have a bonus structure that they pay on as well.”

Cochran said many of the jobs would be unskilled labor positions and offer a great opportunity for the regional workforce.

AppHarvest will be a neighbor to Silver Liner, the manufacturing company that recently broke ground at the industrial park. Cochran said construction for the park’s spec building, which will be the home for Silver Liner, is expected to start in the next two weeks and the city estimates that the company will begin hiring people within the next year.

EVERY THOUGHT CAPTIVE: What Then Will This Child Be?