Adkisson: 2018 Legislative Session will be toughest in years 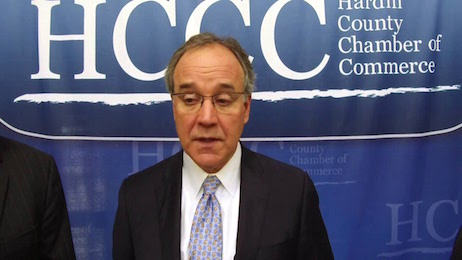 PIKEVILLE — The upcoming 2018 session of the Kentucky General Assembly will be the most challenging in decades, Kentucky Chamber of Commerce President and CEO Dave Adkisson told business leaders in Pikeville Tuesday.

Adkisson, keynote speaker for the Southeast Kentucky Chamber of Commerce’s Membership Breakfast, said there are numerous opportunities present for the moving of the state chamber’s agenda forward, but issues such as the need to deal with pension reform and the possibility of tax reform could complicate an already difficult 2018 budget session for the legislature.

“We can make some progress in this session,” Adkisson said. “We can do things that will encourage job growth. We can do things to improve our schools. But we have to do that against a backdrop that’s fairly dismal on the financial side.”

Adkisson said the conditions were similar in the “great recession” nearly a decade ago, with tax revenue similarly down. However, he said, at that time, the stimulus funding released by the federal government lessened the blow for state government.

“This time, with the pension crisis, there’s no bailout,” he said. “We own that and we’ve got to dig out.”

Adkisson said several solutions have been offered, but that, with the current politically-charged climate in Frankfort, he is not hopeful that compromise can be reached.

The 2017 session, Adkisson said, was a successful session for state chamber, with agenda items that have been in the chamber’s plans for decades coming to fruition, such as passing right-to-work legislation, repealing the prevailing wage and requiring pension system transparency.

However, he said, there are several items on which the chamber is planning to focus in the upcoming session beyond pensions, as well as possible tax reform and the budget.

Included in that agenda are items such as:

• Investing in infrastructure, including items not normally discussed, like broadband and transportation infrastructure such as riverports and airports.

The legislature is set to convene on Jan. 2 to begin the 2018 regular session.

By Russ Cassady, Appalachian News-Express
For the Floyd County Chronicle and Times