State Rep. Jim DuPlessis has long believed in term limits for state lawmakers and said he would advocate for term limits if elected. This week, he pre-filed a bill to limit the terms of legislators. 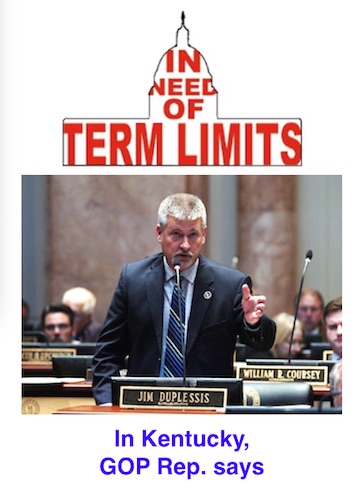 “I’m trying to make good on what I said I would do,” he said.

The Elizabethtown Republican’s bill would limit state senators to four, four-year terms and state representatives to six, two-year terms, not including partial terms. Enacting term limits would require a constitutional amendment, so voters would have to vote on the measure for ratification or rejection.

DuPlessis said if he can’t finish his agenda after 12 years, then he should leave office.

“This is not good for my career,” he said. “That’s the whole point. Politics shouldn’t be a career. It should be a calling.”

This is the second time DuPlessis has proposed a bill regarding term limits. The bill introduced in 2016 did not make it out of committee.

DuPlessis said he felt he had a better chance this session to pass the bill, citing Republicans maintain a majority in the House and Senate and the recent upheaval regarding sexual harassment claims in the General Assembly.

Jeff Hoover, a Republican from Jamestown, was one of several legislators named in a report that he settled a sexual harassment claim. Hoover resigned his position as speaker of the house in early November following the report.

DuPlessis said voters want term limits, and since he pre-filed the bill, other lawmakers have approached him who want to be co-sponsors.

“There’s an appetite for this,” he said.

As written, the term limits wouldn’t be retroactive and apply after the 2018 elections. DuPlessis, who is running for his third term, would be eligible to serve for another six.

“We’re not going to be able to get anybody to vote themselves out of office,” he said of making it retroactive.

DuPlessis posted about pre-filing the bill on Facebook and asked for feedback from voters. Many were in favor of term limits while others said being able to vote someone out of office are a type of term limit. One individual suggested limiting the amount of money that can be spent on elections.

DuPlessis said in an interview he hopes approving term limits will help to take out the power structure.

“It levels the playing field,” he said. “That’s all I’m trying to do.”

The General Assem­bly convenes Jan. 2 for its 60-day regular session.

By Katherine Knott
The News-Enterprise

THREE FROM LOUISA/FT. GAY, ONE FROM DAYTON CAUGHT IN KENOVA METH DEAL