‘From The Rafters Of Rupp’ 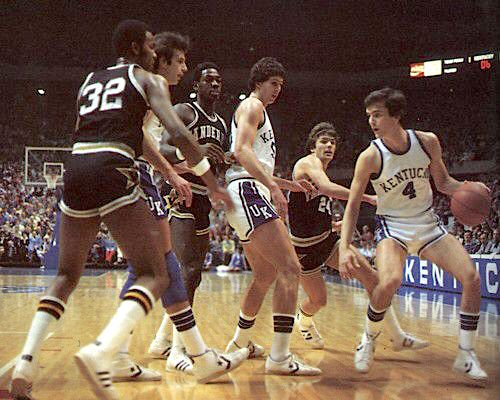 Scores of men helped build the legendary University of Kentucky men’s basketball program as we know it today. More than 40 of these individuals, primarily players, have had their jerseys retired in Rupp Arena. A desire to share the stories of these celebrated UK icons is what first got 1978 NCAA champion and All-America Kyle Macy interested in collecting oral histories.

Based on his concept, Macy first created a series of video interviews with this noted group of Wildcats known as “From the Rafters of Rupp,” now in its second year. 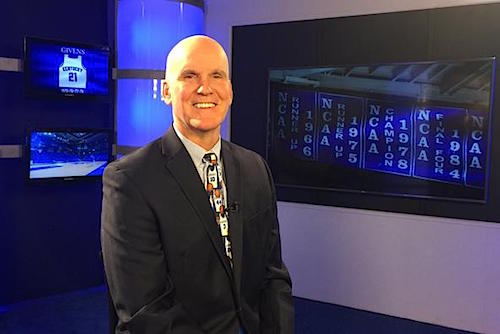 But TV lends itself to shorter-form interviews, and with his program running only 30 minutes, Macy knew there was much more for these legends to tell. After learning about an oral history project with the UK tennis team from his friend, former UK tennis coach and UK Athletics employee Dennis Emery, Macy approached UK Libraries’ Louie B. Nunn Center for Oral History in 2015 with a basketball oral history collection in mind.

With only a handful of UK basketball interviews in the UK Libraries’ collection at the time, the idea of teaming up with Macy on the project excited Nunn Center Director Doug Boyd. “Interviewing University of Kentucky basketball players has always been a major priority. It’s just really finding the right way to get access to those players and to get the right interviewer who can connect with them.

“As it turns out, Kyle Macy is a pretty incredible oral history interviewer. When he showed me the program he did with Coach Hall, I was really blown away and I thought, ‘this is important, this is going to have research value for generations to come.’”

Two years later, Macy and the Nunn Center have collected more than 20 long-form interviews with such Wildcat stars as Louie Dampier, Dan Issel, Kevin Grevey, Kenny Walker, Sam Bowie and Tony Delk. And they plan to keep going beyond the original goal as new jerseys are added to Rupp and new Wildcat athletes join the award-winning tradition. After the short-form interviews air on “From the Rafters of Rupp,” the full oral history interviews with the athletes, averaging more than two hours, are made available online by the Nunn Center. Most recently, Macy interviewed Jack Givens.

Now fans can hear the memories of these beloved players from the source themselves and get insight on what the athletes were thinking in those big games or after those amazing buzzer beater shots, as well as their thoughts on the university at the time, their coaches, the different seasons and how basketball has changed over the years.

“It’s amazing some of the older gentleman that I’ve interviewed — Dale Barnstable, Frank Ramsey, Cliff Hagan — they recall games, and opponents’ names, and how much each of them scored, rebounds, all the different details like it was just yesterday. They have all these vivid, great memories in their mind. That’s the thing that’ll last forever now,” said Macy, a business administration and education graduate of UK.

Boyd agreed. “For a lot of these players, you have a lot of media interviews that have been conducted. But those are mostly short-form interviews. And what oral history brings to the table is the opportunity to really explore in a long-form these life stories — the firsthand experiences.

“You can read stats, you can look at the larger trajectories of seasons, and the wins and the losses. But when you sit down with a player, and you really explore the details about their life, and their observations and their perceptions, and their frustrations and their successes over a season through this storytelling that is oral history, it really transforms the experience.”

And Macy also asks the former UK athletes about their experiences off the court, whether it be playing in the NBA or Olympics or serving in the military. “We recently did an interview with Dale Barnstable, and I got to hear him talk about World War II. He served under General Patton, he got to meet Dwight Eisenhower, and he was part of troops who liberated five concentration camps.”

In addition to providing this treasure trove of UK basketball interviews online, the Nunn Center’s OHMS (Oral History Metadata Synchronizer) technology is making the new oral histories easy to navigate and search for specific moments with the players. OHMS is a web-based system that allows users to search for particular terms within recorded oral history interviews. The system provides users word-level search capability and a time-correlated transcript or index connecting the search term to the corresponding moment in the recorded interview online. So, if you want to hear Givens’ thoughts on beating Duke University for the trophy, you need only search NCAA.

The interest in these UK men’s basketball interviews, primarily in video format, is already evident among researchers and members of Big Blue Nation online. The interviews get more than 12,000 hits a month, and with more than 40 interviews already in process for the collection those numbers will only grow. To view the UK Men’s Basketball Oral History Project, visit kentuckyoralhistory.org.

The Nunn Center for Oral History at UK Libraries’ Special Collections Research Center is recognized around the world as a leader and innovator in the collection and preservation of oral histories. The center is home to close to 11,000 oral history interviews that provide a unique look into Kentucky and American history and represent an irreplaceable resource for researchers today and generations from now. The Nunn Center’s collections focus on 20th century Kentucky history, Appalachia, Kentucky writers, agriculture, black history, the history of education, politics and public policy, the Civil Rights Movement, veterans, the university, health care, as well as the coal, equine and Kentucky bourbon industries.