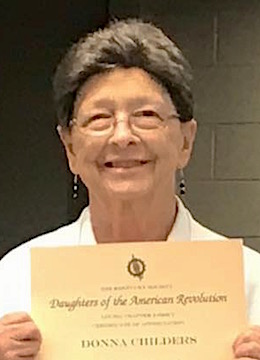 Donna was born November 8, 1946 in Glo, Kentucky to the late Shade and Ethel Chaffin. Donna was a very active member of the community her entire life. She was a member of the Spencer Freewill Baptist Church, Past Worthy Matron of Order of the Eastern Star Louise Chapter 292, a member of the D.A.R., a member of the Democratic Women’s Club and was a Kentucky Colonel. She retired from Three Rivers Medical Center where she founded the Senior Circle.

In addition to her parents, she was preceded in death by her husband Harold Childers, granddaughter Angela, sister Stella Carter and brother Shade R. Chaffin III.

Funeral services for Ms. Childers will be conducted Monday, December 4, 2017 at 1:00 PM at the Young Funeral Home Chapel with Brother Vinny Vanhoose and Brother Jerry Hughes officiating. Burial will follow in the Blackburn Cemetery.

Young Funeral Home has been entrusted with the arrangements. Online condolences may be expressed at www.youngfuneralhomeinc.com