FACES OF HOPE: WE DO RECOVER …Charles McCall’s story, Everything Happens for a Reason 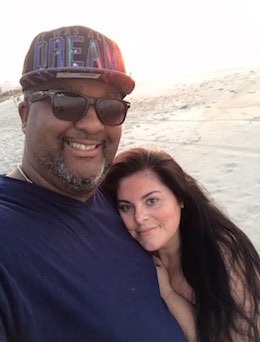 Our 64th spotlight in the FACES OF HOPE: WE DO RECOVER series will focus on Charles McCall’s story, Everything Happens for a Reason.

My name is Charles McCall, and I live in Ironton, Ohio. I grew up in Cincinnati, Ohio with my mom and siblings until I was 15.  At that time I found myself in trouble and came to Ironton to live with my dad and my grandmother, “Ms. Elma”, who played a major role in teaching me how to live life the right way. It would just take some years and lots of tears to use apply those lessons to my life.  I’ve been through a lot situations and I can say I am blessed to be here. After moving to Ironton, I learned to live a normal life with my dad and grandma. They taught me how to work and go to school.

I eventually graduated from Ironton High school and went into the Navy. While I was in the Navy I began to drink heavily. There are times I can’t even remember where I was and what I had been doing. I really loved my time in the Navy. It made me feel proud of myself, something I had struggled with growing up. The birth of my firstborn was the deciding factor of coming home from the military. The relationship with his mom didn’t work out, and that’s when I began to drink heavily again. I worked multiple jobs over the years and would drink when I got off. At times, I would stay up all night and just go to work the next day. I started smoking weed and eventually started selling it to support the habit I created. That’s when I met my two youngest kids’ mom and began a spiral downward. Not thinking I had a problem at all, I functioned normally and even attended college to try to become a teacher. I worked at a kids’ center that I really loved and enjoyed. It felt good to help the kids that were there. I eventually got fired for something I felt was unjust. It angered me, so I began to sell more drugs and smoke more weed. I convinced myself that I could make more in a day doing wrong than I could working any job. Pretty soon selling weed turned into selling cocaine and more and more money. Bigger risk was a norm to me. I always told myself that I was already set up, so I might as well go big.

I eventually got caught. I’m the first to say that was a blessing. I was sentenced to 9 years in state prison. While I was locked up, a change in me occurred. I took a program called the Harvest Program. It’s an AOD (Alcohol and Drug) program at Lancaster Correctional Facility. I had a facilitator that had a big impact on me. He was a four-time felon that got his life together and went back to school to get his degree so that he could help others like him. I still use the tools I learned there today. My kids were also a driving force behind my change. It killed me to see their faces as they were about to leave visits. My daughter was born after I was locked up, so I watched her grow from visits to visit. One day she was old enough to say, “Come on Daddy”. All I could do was look at her and say, “Hopefully soon”.

I made a plan and after doing six years, I was released early. I came home in 2013. Again, I was blessed enough that my aunt, who is a retired prison guard, let me stay with her until I could get on my feet. It was really difficult at first. I had to wear an ankle bracelet for six months. It was $105 a week. After doing six years, it felt impossible and I thought I would go back to prison. I can say that I was blessed to have friends and family that helped me out until I was able to land my first job. It was in no way easy, but I told myself that I was not going back.

My first job was working with a really good friend remodeling apartments, laying carpet, and other odd end jobs. It was a big step in helping me maintain my payments for my ankle bracelet. I eventually got a job thru the CAO, with the help of my Military representative, doing flood relief cleanup on river banks and creeks in the Lawrence County, Ohio area. I never stopped putting in applications everywhere, because that job was just a seasonal six month job. A month after starting the flood relief job, I got a job at a place called McSweeny’s. I worked there for three years until I was laid off due to lack of work. We made snow plow blades and drill bits for oil, gas and coal companies. Again, I can say that was a blessing in disguise. I was laid off for fifteen months. I hated going to the unemployment office and unemployment checks were not enough. I started selling purses, shoes and other accessories to bring in money for the household. It caught on so quick that I made a Facebook page and I started mailing Purses and shoes out to other states. I still felt like that wasn’t good enough.

I came home from putting applications in online at the unemployment office and sat down. I looked my girlfriend in the eye and said there has to be a better way. I was waiting on replies from various companies I really wanted to work for in the drug and alcohol field. I felt I could do well in helping others. I told my girlfriend that I wanted to come up with a website that people like myself can go on and ask questions from people like myself. Questions like, “How do I start a small business?”, “How do I get in a union?”, “How do I get into school?” All the way to “How do I get help for drugs and alcohol?” The hardest part was coming up with a name. A few bounced around and was kind of lengthy. Finally, with the help from my girlfriend who is one of my biggest motivators and supporters, we came up with #PMOP (People Motivating Other People). I thought about everyone who motivates me, and decided to get t-shirts made for them. After people started seeing the t-shirts, everyone asked where I got them and if they could get one. I eventually started selling them. I’ve sent them as far as California, Indiana, Virginia and other places.

More and more people started messaging me because they could relate to my story and felt I was in to something big. People would message me and ask for advice about things and ask how I was able to do the time I did and get out and get my life together. The first thing I would say is “People, places and things”. I believe in brutal honesty, and I’ve learned that people respect that. One guy I now consider a really good friend messaged me. He said he had been watching me and my Facebook page. He said he was in the Army and got out and was in a rut. He said I motivated him into doing something he’s always been afraid of doing and was going back to school. I told him that that motivation has always been there. Sometimes you just have to see others do things to help you see you can do it too. That’s the whole thing about #PMOP. It’s so simple, but can impact so many people. All you basically have to do is live your life the best way you can in a positive way and you can inspire and motivate people without even knowing. It was a different feeling for me. I was used to negative attention from others. It was weird, but felt good to know people were watching me for the good I was doing.

#PMOP is so much bigger than me and my story. Pretty soon people were buying shirts and giving them to people who motivated and inspired them. One girl had breast cancer and fought it until she beat it. She is helping motivate others to fight too. Another girl teaches Yoga and other aerobic classes and got one, because she motivates others to be healthy. The different things and situations go on and on. That’s why I said it’s bigger than me. I eventually, with the help from my girlfriend, started sponsoring basketball tournaments, doing nonperishable food drives that we would donate to the local food banks, sponsoring Cheerleading groups, sponsored a gifted young lady that need help with funding that was going to get her to run in the Jr Olympics. We helped bring a documentary called “I’m Not Your Negro” to Movies 10 in Ashland for a private viewing. Over 120 people showed up and it was a huge success.

Over and over people ask me why I am doing all the things I have done and continue to do. I respond the same way every time. I say “I had a hand in the direction this Tristate area went before why can’t I have a positive influence on how it goes now.” I never gave up on finding a good job. I actually have an amazing job I’ve been at for almost seven months now. I work for Toyota, up in Buffalo, West Virginia. I’ve learned that nothing happens overnight. It takes consistency to achieve all of the goals you set. I tell people all the time, set goals in your life. Once you reach those goals, set more. You might even surprise yourself how far you really can get in life.

My life changed for the best December 18th, 2007. Some people look at me like I’m crazy when I say that, because that’s when I was arrested. I look at it like that was God’s way of saving my life. In May I will have been home five years. I couldn’t imagine a better life to live now. I don’t have to worry about looking over my shoulder or wondering who just got busted or who’s snitching anymore. I’ve bought my first house ever. I have an amazing woman in my life, I have custody of my kids, and I try to always keep a positive attitude about life. People ask me how I always stay so positive. I respond back and say “$18”. They look at me with a puzzled face and ask what I mean by that. That’s when I tell them, that’s what I got paid a month when I was in prison. Everyone has a bottom. I reached mine quickly. Everything I loved was yanked from me. I actually learned humility and became the man I am now. That was a very humbling experience that I needed to go through to grow as a person. I’m not saying everyone should be locked up, because prison doesn’t change anyone. You have to want change for yourself first. That’s with anything in life.