PREDATORS OF THE NIGHT, KENTUCKY’S MOST COMMON OWLS; HAVE INCREDIBLE HEARING, ACUTE VISION

They are predators of the night.

Most active from twilight to dawn, they are able to locate prey in darkness because of their incredible sense of hearing and acute vision.

Owls have large, forward-facing eyes and a facial disk that acts as a parabolic reflector, enabling them to precisely locate sounds. Some species have asymmetrical ears that aid in homing in on these sounds.

Soft plumage makes them virtually silent in flight, as they dive from a perch and pin unsuspecting prey to the ground with sharp talons, usually swallowing mice, voles and other small mammals whole, later regurgitating the indigestible parts as pellets of fur and bone

But because of their nocturnal hunting habits and coloration, owls are seldom seen by even the most avid outdoor enthusiasts. Their brown, tan and black feathers create natural camouflage.

Continent wide there are 22 species of owls, according to Smithsonian’s Birds of North America.

In Kentucky, there are eight species of owls, including the Barred Owl, Great Horned Owl, Eastern Screech-Owl, Barn Owl, Short-Eared Owl, Northern Saw-Whet Owl, Snowy Owl and Long-Eared Owl, but not all nest here. Some are infrequent migrants, only seen rarely during the cold weather months.

Here are some details on the three most common owls that are year-round residents, found statewide in Kentucky: 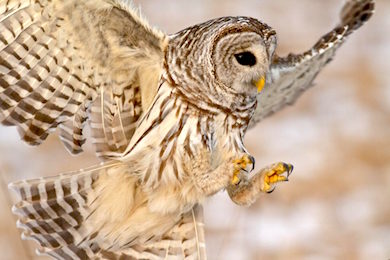 * The Barred Owl (Strix varia), often referred to as the “Hoot Owl,” has a distinctive, drawn-out call which sounds like: “Who cooks for you, who cooks for youAwlll.”

The Barred Owl is often referred to as the “Hoot Owl” because of its distinctive drawn-out call which sounds like “Who cooks for you who cooks for youAwill.”
Mimicked by wild turkey hunters on an owl hooter during the spring season, this “locator” call is used at dawn to get a tom turkey to gobble on the roost, so that the hunter can pinpoint the turkey’s location.

Adult Barred Owls are 17 to 24 inches, with a 50 to 60-inch wingspan, and weigh about 1.4 pounds. They have a large, round head, long barred tail, and dark eyes, with plumage coloration of dark brown, white, and yellowish tan.

The preferred habitat is forested areas, especially bottomland hardwoods along rivers. They nest in hollow trees, but will also use nest boxes.

Incubation by the female is 28 to 33 days. Young stay in the nest for 42 days, and are fed by both parents.

“The Barred Owl is often active in daylight,” said Kate Slankard, raptor biologist for the Kentucky Department of Fish and Wildlife Resources (KDFWR). “They may come out to hunt as early as an hour and a half before sunset.”

The Barred Owl especially likes to feed on aquatic animals associated with wetlands — crayfish, small fish, frogs, snakes and salamanders. “Sometimes during the day they can be found perched over a puddle (in the swamps),” said Slankard.

* The Great Horned Owl (Bubo virginianus) is a strong, fierce owl that has an enormous geographic range that extends from Alaska to Mexico.

“Great Horned Owls are flexible in the kind of habitat they can live in,” Slankard. “(In Kentucky) they nest in old hawk nests in semi-open (farm) land, or hollow trees in forests. 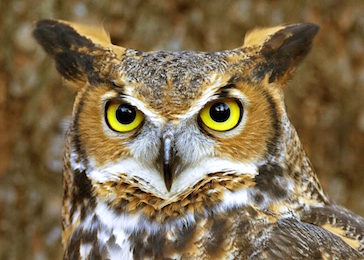 “Great Horned Owls eat skunks,” said Slankard. “When we handle a bird caught in the wild it often smells like a skunk.”

Even the owl’s striking appearance is somewhat threatening — large, yellow eyes, a rusty-colored facial “mask,” and a tuft of feathers on its head that forms “horns.”

Adults may weigh up to three pounds, are up to 25 inches in length, with a 60-inch wingspan. Coloration is a mottled, grayish brown, with a white chin and throat.

They hunt primarily at night, feeding on mammals, but also eat birds and reptiles.

Early nesters, Great Horned Owls lay their eggs in winter, with incubation lasting 28 to 35 days. Young stay in the nest for up to 45 days and are fed my both parents.

* The Eastern Screech-Owl (Otus asio) is a diminutive owl that lives in a variety of habitats, both rural and suburban. 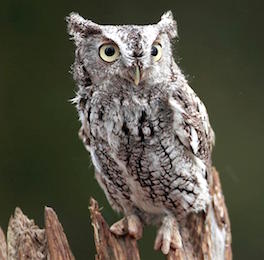 Two distinctive characteristics are their coloration and their song (call).

Their call, often confused with the Barn Owl, is a mournful, melodic, whinny.

Eastern Screech-Owls only weigh about 5.9 ounces, are eight to 10 inches in length, and have 18 to 24-inch wingspans.

They are most active at dusk and during the night, feeding on small prey — insects, arachnids, mammals, amphibians, reptiles and fish.

They often roost in a tree cavity during the day and like to sun themselves on cold winter days at the cavity entrance.

Two to eight small eggs are laid in the clutch. Incubation is 26 days, and young stay in the nest for about 28 days.

Their range includes the eastern U.S., and a few states west of the Mississippi River, from eastern Montana to Texas.

Owls, while seldom seen, are numerous in Kentucky, and a valuable resource since they prey heavily on rodents.