One of the worst outbreaks in 10 years of a fatal disease affecting Kentucky’s deer has effectively ended with the first frosts of the year, but its absence in the western part of the state has created questions for wildlife biologists. 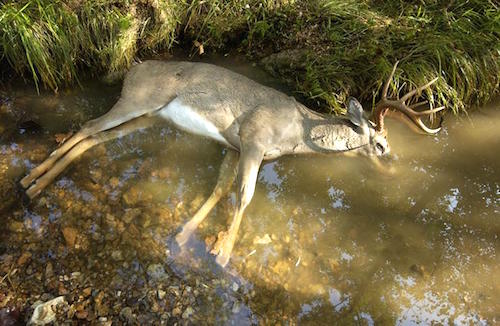 Epizootic hemorrhagic disease is virus contracted by deer from a biting midge — a small fly-like insect — that affects blood vessels, causing animals to hemorrhage and eventually succumb to infection.

Almost 4,600 deer died between June and the end of October this year, but the majority of the infected animals were in only five counties in eastern Kentucky. In 2007 — the year of the last major outbreak — the nearly 4,000 deceased deer were more evenly distributed throughout the state, with some of the highest rates of infection being found in western Kentucky, where there is a denser deer population per square mile.

Iga Stasiak, wildlife veterinarian at the Kentucky Department of Fish and Wildlife Resources, said the department can only speculate at the change in pattern and has a lot of research ahead of it following the outbreak.

“Usually EHD is more widespread across the Midwest, but this year, the outbreak followed a regional pattern across the Appalachian Plateau into Ontario,” Stasiak said. “We’re still trying figure out why it distributed the way it did and the effects on population, but we should know more after (deer season).”

EHD can occur in most parts of North America, but outbreaks are more common away from warmer climates in the South where animals are less likely to come in contact with large populations of infected midges. The virus can also affect cows but only brings about acute symptoms while being highly fatal to most deer.

Kyle Sams, a deer biologist with Fish and Wildlife, said thorough research of several contributing factors in the outbreak would have to be conducted before any conclusions would be reached, but a trend in more mild and rainy winters in eastern Kentucky could explain the odd concentration.

Sams said dryer conditions in western Kentucky could also explain why fewer deer were infected in the area, but there was no conclusive evidence.

While the outbreak may be one of the worst Kentucky has ever seen, Stasiak said hunters and environmentalist don’t have cause for alarm just yet.

“We might make some adjustments for hunting season potentially next year, but any significant losses in the population are expected to rebound as usual,” Stasiak said. “We’re going to watch and see how things go this season, but EHD has never caused a serious die-off to justify a season change.”

Sams said he’s been advising concerned hunters in eastern Kentucky to consider holding back this deer season if they are worried about deer populations in their area. He also said property owners could contact him for advice on how to make their land more likely to receive deer.

Sams can be reached at 502-564-7109 ext. 4523. Deer suspected of having succumbed to EHD can be reported to Fish and Wildlife online at www.research.net/r/SickorDeadDeerKY2017.