Cincinnati, Ohio — Former Lawrence Co. football star A.J. Cyrus, a senior at Mount St. Joseph University (6-4) caught a 4 yard touchdown pass in the first quarter of his team’s 56-10 Senior Day victory over Defiance College on Saturday November 4th. It was the last game of the season for the Lions and Cyrus. 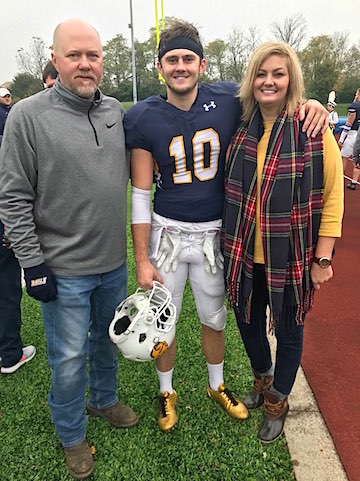 “… I was recruited my junior year of high school by Coach Hopp who is now the head coach of MSJ. Loved the city environment and small school set up. The coaches and the way things are done made that an easy decision for me. Freshman year first game I broke my finger on my throwing hand that required surgery and was out the whole season. Sophomore year I decided to switch to safety for more playing time and had some success with that but when the qb spot opened back up for next season I switched back but I never earned that starting spot until senior year after I switched to wide receiver. Had a few touchdowns this season and some big

plays and even though I didn’t see a lot of time out on the field I don’t regret anything. Football has instilled so much character in me and will carry me through life. Accountability, teamwork, and a bond with teammates and coaches are some of the most valuable things football at the mount has given me.”

“… I wanna thank coaches Joey Cecil, Alan Short, Mike Woods, John Caudill, Blake Preece, Travis Hughes, and Fred Thompson for building me into the player/person I am today and without them I wouldn’t have decided to play football at the college level.”

“… I want to give a special thanks to Dr. Norman and Sue Edwards for everything they’ve done for me to get to where I’m at today.”

“… I also wanted to give one more shout to my uncle Morgan who was a huge influence for me in the sport.”

“… And there’s nothing better than the Friday night lights. I believe everyone should go out and do something they love and play every sport that’s open to them because after school you can never get those opportunities again. Be coachable and always respect your coaches and teammates.”

“… Im between going to grad school at Marshall or enlisting in the Navy. The goal is to be in the FBI.”