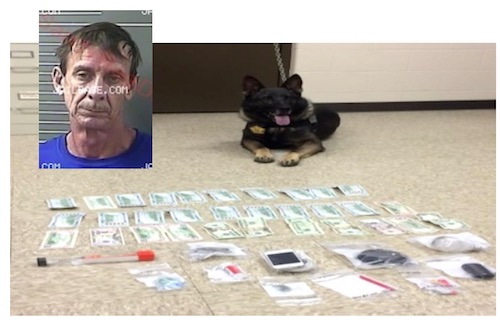 A Lawrence County man was arrested early Monday night on drug charges after a traffic stop on state Route 40 near Blacklog, which is an area located in central Martin County.

According to a press release report from the Martin County Sheriff’s Department, David M. Ferguson, 50, of Blaine, was taken into custody facing multiple criminal charges.

The report states that a drug bust happened shortly after 6 P.M. when Martin County Sheriff John Kirk conducted a traffic stop on a red Chevy truck being driven by David Ferguson on KY 40 in Blacklog for having no tail lights.

As Sheriff Kirk was talking to Ferguson, he noticed the possible odor consistent to marijuana. Sheriff Kirk then called for backup to the scene for a deputy and his K9 to conduct a search of Ferguson’s vehicle.

Deputy Billy Patrick and his K-9, Grimm Reaper soon thereafter arrived on the scene and were given consent by Ferguson to search the vehicle. With the help of the K-9, deputies seized marijuana and a substance believed to be methamphetimine, three syringes, a set of scales, a burnt light bulb, several small bags and other narcotics were found. (See Photo)

After the seized contraband was taken to the Martin County Sheriff’s Department offices to be itemized, the end result revealed in the total tally that deputies had seized about 2.4 grams of methamphetamine, more than 3 grams of marijuana, scales and more than $2,200 in cash.

David Ferguson was taken to and lodged in the Big Sandy Regional Detention Center in Paintsville, where he still being held as of Wednesday morning November 8.