TRIO ARRESTED BUT VICTORY OF THE DRUG SEIZURE TURNS INTO CRISIS AFTER TWO SUSPECTS BEGAN TO OVERDOSE; LISTED IN CRITICAL CONDITION AT LOCAL HOSPITAL

SHERIFF KIRK CLAIMS THE REWARDS OUTWEIGH THE RISK BECAUSE SO MANY METH AND OTHER DRUG-TYPE DEALERS ARE BEING CAUGHT THROUGHOUT EASTERN KENTUCKY THAT THE COURTS ARE ONLY SENTENCING LIGHTLY; DEALERS WILLING TO RISK GOING TO JAIL FOR LESS THAN A YEAR, WHILE GETTING A CHANCE TO EARN “$1 TO 2 MILLION DOLLARS” IN DRUG DEALING SALES!! 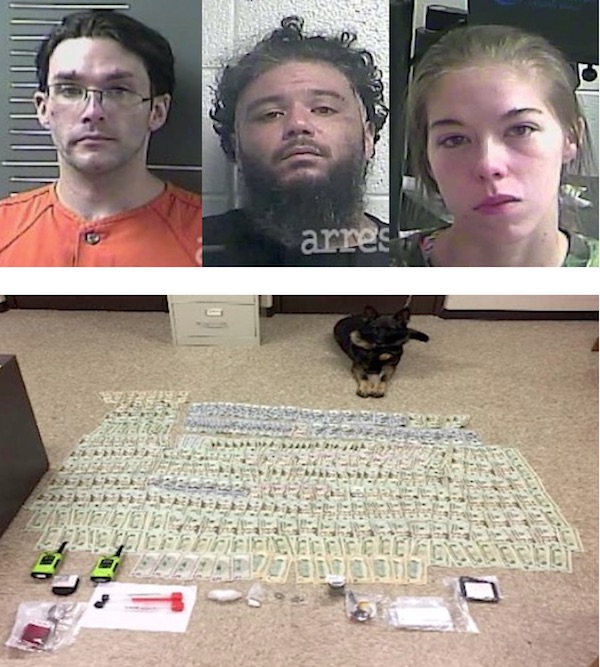 After Martin County deputies reported that they received a tip that a large amount of drugs would be coming to Martin County from Lexington, and that the drugs would be distributed in the Warfield area, law enforcement officers in the area conducted a traffic stop that would end up with three people facing numerous charges after their vehicle revealed in what would turn out to be the largest meth bust in Martin County history.

Those three individuals who were arrested were identified as Billy D. Williams, 34, of Nicholasville, Hagan Johnson, 32, of Lexington and Mary Parsons, 25, of Beauty, on Wednesday night November 1.

But what started out as a major successful drug interdiction quickly took a serious downturn, when 2 of the 3 suspects began displaying symptoms of a drug overdose, which led to them being rushed to Paul B. Hall Med Center where they were listed in critical condition Friday afternoon.

According to a press release report from the Martin County Sheriff’s Department, a Kentucky state police trooper pulled over a car after seeing it cross the double-yellow line on state Route 40 in Warfield.

According to Martin County deputy Aaron Blevins, when the driver, Billy Williams, was asked to get out of the car, they could see a syringe in the driver’s seat. When deputy Blevins asked Williams if he had anything in the car, Williams replied he had some marijuana in the vehicle. Deputies also said Hagan Johnson and Mary Parsons were both passengers in the vehicle.

According to the deputies, there was also a large amount of money in the car and what appeared to be crystal meth. Deputies say they also found marijuana in the car, pills, scales and baggies.

An inventory analysis later at the Martin County Sheriff’s Department offices in Inez revealed the complete amount seized in the traffic stop was a total of $12,640 in cash and 114 grams of crystal meth, with a street value of $10,000; plus several pounds of marijuana and suboxodone as well.

According to the deputies, they found a clear baggie on Hagan Johnson which they believe had crystal meth in it and a couple of other baggies with marijuana.

As deputy Blevins was talking to Billy Williams,the suspect stated that he was starting to have chest pains, which then deputy Blevins noticed he had begun sweating excessively. At around that same moment, Mary Parsons was discovered unresponsive in the back of police cruiser she had been placed in. That is when all of the officers on the scene discovered that both them were in the beginning stages of drug overdosing.

A call was immediately made to the emergency services for Netcare Ambulance Martin County, where the EMTs began treating both suspects.

As they placed Billy Williams in an ambulance, Mary Parsons, who was about to be put in a second ambulance, went into a full ‘crash’, and the EMTs had to give Parson TWO shots of NARCAN on the side of the road.

Both Billy Williams and Mary Parsons were then transported to Paul B. Hall Medical Center in Paintsville (Johnson County). As of Friday afternoon November 3, they both were still listed as being in critical condition in the intensive care unit at the hospital.

All three of the suspects are now facing several charges

The warrant charge for Hagan Johnson was for several bench warrants out of Fayette County, Kentucky on similar drug charges that he is now facing in Martin County.

Martin County Sheriff John Kirk said the circumstances around the drug bust shows there was a good indication the drugs were set to be sold in the local area.

“It would of hit the streets and there’s a great chance we could’ve had a lot more deaths,” Kirk said.

Sheriff Kirk stated his office will send the drugs to the state lab to test if they have been laced with fentanyl or carfentanyl. Kirk also said it appears as though there’s a been a resurgence of crystal meth in the Eastern Kentucky area.

Sheriff Kirk says Martin County, along with several other counties in the region, are desperate for additional help from the state and especially the federal government with tackling the drug epidemic.

Kirk thinks the justice system needs to crack down on drug offenders.

“There’s so many people getting caught, they don’t dread going to jail,” Kirk said. “They’ll take the chance on making a million dollars or a couple million dollars to go to jail for 10 or 12 months. I think we just need to be tougher when it comes to the sentencing phase.”