Gov. Matt Bevin opposes recreational marijuana use, but how much of what he says about pot is true?

During a question-and-answer session at a luncheon with business leaders Monday in Lexington, the Republican governor said he opposes legalizing recreational marijuana use, in part because he claims marijuana edibles, like gummy bears, cause “overdoses” in states where they are legal. 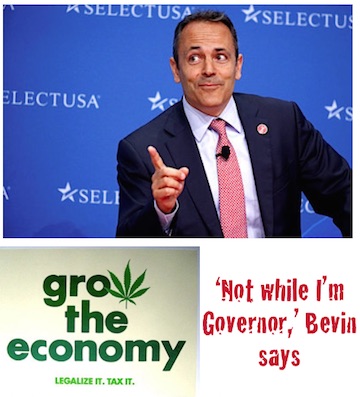 “If you’re already a little bit doped up … and you’re getting doped up by eating gummy bears, gummy bears are addicting enough already,” Bevin said. “There aren’t many people in this room who can open up a pack of 20 and just eat three or four, but now imagine if they’re laced with THC.”

Bevin has rejected any idea of legalizing marijuana in Kentucky to help the state raise money as it deals with billions of dollars’ worth of pension debt.

Bevin said Monday that police in marijuana-legal states have become inundated with “overdoses” since recreational pot use became legal. He defined overdosing as “taking more of something than one intended to, intentionally or otherwise.” He also said that hospitals have had to deal with an influx of kids consuming THC-laced gummy bears (THC is the primary mind-altering compound in marijuana).

But Dr. Daniel Vigil, of the Marijuana Health Monitoring and Research Program at the Colorado Department of Public Health, said neither of those statements are fully accurate. 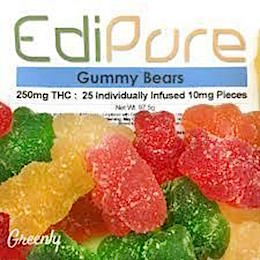 A 2017 report on “Drugs of Abuse” from the Drug Enforcement Agency reported zero fatal overdoses from marijuana. Vigil said Bevin’s definition of overdosing doesn’t match the way most people use the term.

“Most people think of an overdose along the lines of an opioid overdose, which is life-threatening,” Vigil told Courier Journal. “Marijuana on its own would not be life-threatening, but the behavior related to it could put someone in danger of death.”

Vigil said “overconsumption” is a more accurate word, and he stated there were roughly 200 reported cases of overconsumption, according to Colorado’s poison control data. Of those 200, 40 of the victims were younger than 8 years old.

“We are not seeing large numbers in the poison center data, which is where we have more info on overconsumption,” Vigil said. “There were 200 calls in 2016, that includes things like a teen being under the influence and a parent calling about it or a child accidentally consuming it.”

Bevin also said Monday that one edible gummy bear is typically the equivalent of 40 percent of a joint.

“The caliber of THC in cannabis is like nothing compared to when a lot of us were younger, some of you might have experience, I don’t know … I won’t ask,” Bevin said.

But Colorado also has passed regulations limiting the amount of THC in edibles, Vigil said, and saying one gummy bear is nearly half the potency of a joint isn’t right, either.

“That’s not accurate in Colorado at this point,” Vigil said. “Colorado currently has regulations limiting a serving size to 10 milligrams … we estimate 80 milligrams is the average amount of THC in a joint.”

Colorado did, however, recently pass legislation to ban gummy bear edibles as a way to prevent accidental consumption by kids.

The law, which went into effect in Colorado this month, banned “the production and sale of edible medical marijuana infused products that resemble the form of a human, animal, or fruit” as a way to deter children from consuming the products.

“This is an important step in maximizing the State’s public health and safety by keeping marijuana out of the hands of minors and raising consumer awareness,” Mike Hartman, the executive director for the Colorado Department of Revenue, said in an Oct. 1 statement.

Under the legislation manufacturers couldn’t sell edibles that look like candy.

A phone call and emails to Bevin’s office seeking comment were not returned Tuesday.

A Gallup poll released last week showed that 64 percent of Americans are in favor of making marijuana legal in the U.S., the highest in nearly 50 years. More than half of Republicans polled also supported the legalization of marijuana.

And while Bevin said he could be in favor of marijuana for medical use if it is regulated properly, recreational use is a no-go.

“There is no way, when I am governor, that I will ever legalize recreational marijuana in Kentucky,” Bevin said. “It’s just not going to happen.”