FACES OF HOPE: WE DO RECOVER …Ashley Keiffer’s story

Our 59th spotlight in the FACES OF HOPE: WE DO RECOVER series will focus on Ashley Keiffer’s story, No One Is Ever Too Far Gone. 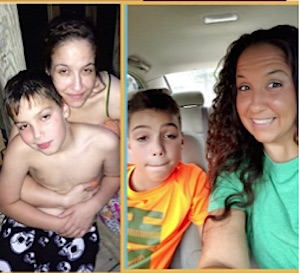 My name is Ashley, and I was the girl your momma warned you about. I grew up in a great home and had no reason to turn to drugs. I started drinking and hanging out with older friends at the age of eleven. It wasn’t long before I was smoking weed. Shortly after that I was smoking crack and stealing from stores. I was an out of control child that would run from everything. I started skipping school and continued to get worse at home. I was put into the state’s custody and bounced around between eighteen different juvenile facilities. None of the facilities would accept me because I was violent. I would straighten up long enough to get out of a place, but before long I would be back in. I was smoking crack and doing any kind of drug you can think of.

When I was sixteen I robbed a heating and air-conditioning place for their company truck, petty cash, and laptops, then headed to Miami Dade County. After I had run out of money and robbed people blind from one end of the beach to the other, I called my mom and asked her to wire me some money. Little did I know I was being set up by undercover cops. Once they had me in custody they took me to a place called The Bridge. I was there for several months until my judge ordered me a plane ticket home.

Once I was home I ran before the social worker got me. I was finally kicked out of state’s custody at the age of seventeen and was told that if I committed another crime I would be tried as an adult. When I was eighteen I was heavily cooking meth and ended up pregnant with my first son. When I was six months pregnant my step dad and I got into an argument and he committed suicide with a shot gun on the front porch. I blamed myself for a very long time. My child’s father was very abusive and I left him for my junior high love. I stole his car and a lot of money on my way out. Later on I took a horrible beating for this. It left me unable to even take care of my child. I ended up pregnant with my junior high love but went home to the abusive man.

It took me five years to leave him and I turned to stripping to pay the bills and care for my children. My drug addiction only got worse and now I was drinking also. It wasn’t long until I spun out of control. I shot up for the first time with a fentanyl patch. Needless to say I overdosed on the kitchen floor. I was soon shooting up meth, which was my love. Next thing you know I’m toting meth labs around and my life is completely falling apart. I caught my apartment on fire. I was losing everything. The only thing left was my SUV.

At the age of twenty-two I was arrested for a meth lab. When I got out I was on home confinement at my grandmas. This is where I learned to shoot up on my own, right in my grandma’s house. I completed ten months home confinement and was high the whole time. Soon I was locked up for a high speed chase, stolen vehicle, and was a suspect for breaking into several AT&T stores and stealing all of their phones. At this point I was gone. I was smashing bricks through store windows and robbing them blind. I was pistol whipping people, kicking doors in, and making guys take their pants off while at gun point. I was soon locked up again. I tried drug court and only made it two months before I was terminated for beating a girl up in the middle of class. While I was waiting on a court date, my friend called me and stated that she told a $70,000 lie and she would spend it all with me. It was on. We bought a BMW, paid rent for 2 months, and a ton of Sudafed. We turned our apartment into a meth lab. I was spun and don’t remember a lot of that time.

I had to do 6 months in jail for the fight and when I got out I went harder than ever before. I was riding around to different states with car loads of people buying Sudafed. This went on for years. I was homeless and didn’t have a car. I hustled people and manipulated everyone. I ended up in a very toxic relationship. He left me for dead over some dope. He beat me so badly that you couldn’t even tell it was me. I flung myself out in front of a car to get away from him. He ended up coming to where I was and shooting up the house I was in. I snuck out the back door and had to leave for a while. I was so badly beaten that I don’t remember much. I remember laying on a couch and being fed pain pills and Xanax. Once I was able to walk again I was back to hustling, all the while trying to duck and dodge my ex.  Things got better when my boy got out of prison. No one would mess with either of us. We started ordering ice, and a lot of it. We ended up buying a stolen brand new camper, and a week later we were in jail. While in jail I decided I wanted something different. I wanted to stay clean and get a job at Tudors.

Forty-four days later I got out and went straight to the dope man’s house. I was high for four days and it hit me. I had nowhere to go and I was tired. I reached out to a friend in recovery and she got me into detox at Prestera. I then went on to Pinecrest for 28 days. From there I went to LifeHouse. That’s where the game changed for me. I took eleven months to focus on me. I worked at Subway, and worked the 12 Steps. I was baptized and God changed me  Today I have my son full time, have an amazing job, and I am working on opening The Ark, a long-term program to save women drowning in addiction. As long as I focus on God and helping other people. He makes it about me!!