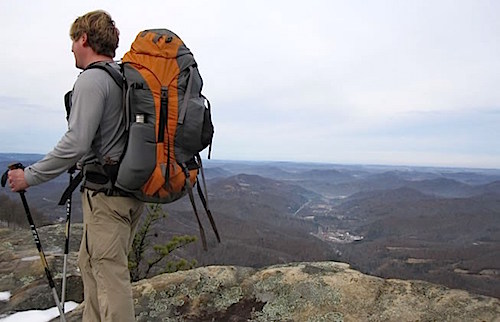 The connections will create 7,000-acre and a 6,000-acre protected areas respectively, and will make available almost 50 percent of the land needed for the Pine Mountain Trail.

Hugh Archer, executive director of the land trust, said nearly all of the land is on the North face of the mountain in Letcher County. The largest individual tract, in which the trust bought a one-quarter share, is on the South side. Archer said that share was bought from Kentucky River Properties, which had bought it from a member of the Eversole Family, which owns the remainder of the tract.

“It’s the first land they (Kentucky River) have sold in 100 years except for a couple of horse farms” in central Kentucky, Archer said.

The purchases cover about nine miles of Little Shepherd Trail from U.S. 160 at Hurricane Gap (Sand Hill) to Eddie Saltess Overlook on the Devil’s Backbone section of Little Shepherd Trail. The land is on both sides of Kingdom Come State Park, and includes more than 100 cave openings, some only large enough for bats, but other large enough for a person. He said while the bats will be protected, the caves will not be completely off limits to people.

“ We’re not going to gate them,” Archer said. “We’ll probably enlist the local cavers to help manage them.”

The caves include Crystal Cave and the Linefork Caverns, Archer said. He said the Eastern section of the purchase also includes a small section of uncut forest at least 125 years old. The Eastern Section begins at Creech Overlook and goes toward Whitesburg.

“This has been my most important target in the 25 years I’ve been working on it,” Archer said.

“I think it’s wonderful news for the trail,” Baker said. “It’s all property that the trail runs alongside or through.”

Pine Mountain Trail is part of the larger Great Eastern Trail, a planned 1,800- mile wilderness trace that will run from New York to Alabama, roughly parallel to the Appalachian Trail.

Archer said with the old-growth forests and rare plants, the Pine Mountain Trail will be the “prettiest section in the whole 1,800 miles.”

Pine Mountain is home to at least 100 rare and endangered species of plants, fish and animals, one-seventh of all of the monitored plants and animals in Kentucky, Archer said. Blanton Forest alone, in Harlan County, is “only equaled by one other site in the world, and that’s in China,” he said.

The three preserves created by the new purchases will be called the Linefork Preserve, the Hurricane Gap Preserve, and the Kingdom Come Preserve.

By Sam Adams
The Mountain Eagle