During an Oct. 20 fiscal court meeting, Hale described the request as “crazy” and said it would cause an “undue hardship” on Floyd County residents. 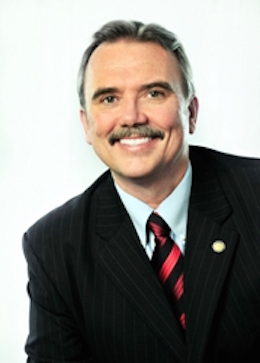 The PSC has scheduled hearings in the case for Prestonsburg, Hazard and Ashland next month, and Hale encouraged county leaders and community members to attend the Prestonsburg hearing, which will begin at 5:30 p.m. on Nov. 2 in the Gearheart Auditorium at Big Sandy Community & Technical College.

“I will be there. I will be objecting to it. I think they should not get anything,” he said. “They’re asking for a 16 percent increase, when they’ve made $15 billion since 2006.”

He blames AEP for the loss of coal jobs in Eastern Kentucky, alleging that when AEP switched its plant in Louisa to natural gas, “they took 2 to 2.5 million tons of coal out of our area.”

“Obviously, they’re trying to recoup for something that I think is the number one reason why our area in Central Appalachia has failed, not failed, but gone down because of the economy,” Hale said. “The reason is because they took 2 to 2.5 million tons of coal out of our area when they switched to natural gas, and yet they’re asking for this to take care of their rates and try to maintain the same level of profits that they had on the backs of the poor people. And we object to that vehemently.

“They’re actually asking … for a rate increase in order for them to, for the dismantling of the infrastructure at the coal plant, which is crazy,” he said. “That’s why our economy has took a nose dive and we’ve lost $4.5 million …because we don’t have the coal that’s being produced here.”

“They’re getting approximately $600,000 just from Floyd County in the LIHEAP program that supplements our people; $35 million in the whole 20 counties, and yet they want to make sure that they’re maintaining a stock level to their stockholders,” Hale said. “Well, everybody else is making cuts. Everybody else is trying to do more with less. It’s time for them to do the same thing. We do not need this. We don’t want this and we’re going to fight this.”

He continued, “I think it’s very important that we crowd into that auditorium and make sure our voice is being heard. Because, You’ve got to look at it, guys. If it was a necessity, we understand it. It’s not a necessity, not when they’re getting paid to dismantle the thing. That’s crazy. They dismantled it and it hurt our economy and then they turn around and ask us to take care of the dismantling, which is what put us in downward spiral in the first place.”

The Nov. 2 meeting will include a presentation by PSC staff on state regulations and an overview of the Kentucky Power application. Written comments may be presented at that meeting and members of the public will also be allowed to speak. All comments will be video-taped and added to the PSC case file.

Hale commended Attorney General Andy Beshear for representing the public in this case. Beshear announced on Oct. 4 that his Office of Rate Intervention will recommend that the PSC deny the AEP request, proposing, instead, that AEP implement “stronger controls on spending” and decrease the amount of funds its shareholders receive.

“Our families in Eastern Kentucky are already past the breaking point. They simply cannot afford another increase,” Beshear said in a press release. “This company must manage its needs without placing them on the backs of households, business, seniors, schools and local governments.”

AEP, which serves 168,000 people and businesses in 20 Eastern Kentucky counties, initially sought a rate increase that would provide it $69.5 million in additional revenues, but after the company refinanced $325 million in long-term debt, it reduced its request for additional revenue to around $60 million.

In the past several years, AEP has taken steps to improve the economy, with an economic development grant program that provides funds to numerous businesses and organizations.

In March, the PSC approved another request from AEP to help the coal industry in 13 of the counties it serves.

AEP reported in that case, 2017-00099, that coal production in 31 counties, many of which are in its service area, decreased 78.5 percent, from a peak of 131 million tons in 1990 to 28.09 million tons in 2015, and employment dropped from 24,912 to 5,947. The tariff changes approved in that case provided discounted rates for coal companies and a new program to encourage qualifying coal companies to reopen closed mines.

The PSC approved the request, noting the changes are temporary and the “considerable need for economic development” in the company’s service territory. The tariff changes approved in that case expire on Dec. 31.

The PSC has received numerous comments from the public in this current rate case, 2017-00179, online at, psc.ky.gov.