BEVIN SAYS TEACHERS, STATE WORKERS DID NOT EARN THEIR PENSIONS

Kentucky pension reform: Does Matt Bevin have the votes to pass his plan? 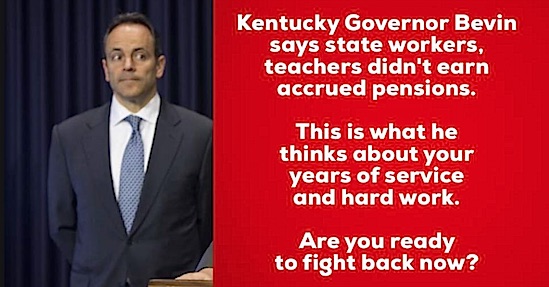 Click to hear what Gov. Bevin says about pensions and raising taxes

From Brad Bowman@Kentucky Democratic Party and others on SoundCloud.

{UPDATE: State Rep. Jill York called and said she has not been given a copy of the Governor’s pension plan so she does not know enough to give an opinion. Also, Amanda Stamper from Governor Bevin’s office called and said the quote heard on the audio was taken out of context by the Democrats to make it sound like Bevin is against the teachers. She said his mother and grandmother were teachers and he knows how hard they work and how little they get paid but something has to be done to keep the pensions from being stopped because of lack of funding.}

FRANKFORT, Ky. — Gov. Matt Bevin was not alone Wednesday when he released the plan to change Kentucky’s pension laws. He was joined by House Speaker Jeff Hoover and Senate Present Robert Stivers.

The public endorsements by the two Republican legislative leaders was a strong sign that once the plan becomes a bill and is considered by the House and Senate, it will pass.

In fact Bevin predicted later Wednesday that the bill will pass the Republican-controlled House and Senate “with flying colors.”

But House Democratic Caucus Chairman Dennis Keene, of Wilder, said Friday if the bill passes the House it may be with only votes of majority Republicans.

“Right now I don’t know of any Democrats in the House who are for it,” Keene said. “I think it passes the Senate, but I think the concerns that have been raised about it means that it will not be an easy task for Speaker Hoover to secure the votes they need in the House.”

Bevin hailed the plan Wednesday as a “national model” and said it will finally put Kentucky on a path to resolving its public retirement system debts that officially are booked at about $40 billion but that Bevin says are actually more than $64 billion.

The plan would put new teachers and most other new public employees into savings plans similar to 401(k)-style plans used widely by private sector employers. Current employees and teachers would be shifted into such plans after working 27 years under their current traditional pension plans.

It would change the way the government pays for retirement benefits, requiring big increases in state spending on pensions beginning next year.

But the plan has drawn opposition because it cuts benefits in several ways. For instance, current employees and teachers would be required to pay 3 percent more of their salaries for retirement health benefits.

Retired teachers would see cost of living increases of 1.5 percent in their benefits suspended for five years, and teachers who retire in the future would not get such adjustments for the first five years.

Many stakeholder groups have objected to at least major parts of the plan. “I’m not a political person, so I don’t know if it will pass,” said Jim Carroll, president of the advocacy group Kentucky Government Retirees. “But I’ve never seen as much engagement by stakeholder groups with legislators on anything like I’m seeing now.”

Carroll said as lawmakers of either party hear the concerns support for the plan – at least in its current form, could weaken.

Senate Republican Leader Damon Thayer, of Georgetown, said, “I’m hearing very positive things from members of both chambers. I personally don’t know how anybody could vote against it. We’re doing what must be done — taking on a crisis in a meaningful way. It’s not a perfect plan, but it’s a good one.”

Moreover, like most bills, this one is expected to only a majority of members voting – so long as at least 40 members vote yes – to pass. House Speaker Pro Tem David Osborne, R-Prospect, said he does not expect the bill to carry any appropriation or emergency effective date – conditions that would mean the bill would need at least 51 votes to pass.

Keene said that concerns over the plan should sway some Republicans House members, particularly the 23 freshmen worried about re-election. Many of those freshmen represent rural areas where school districts and local government are the major employers.

But Osborne said he’s not worried about losing the freshman class. “They came here to make a change, to do the difficult work of government,” Osborne said. “Many of them ran their campaigns on this issue.”

Keene said Democrats have various concerns about the plan. One major concern of many is that it has no provision to raise new revenue, which he said is badly needed not just to ease any cuts in benefits in pension plans but to avoid massive cuts to other government programs to pay for pensions.

Bevin has said he will soon call a special legislative session where his plan – by then in the form of a bill – will be considered.

“I don’t know if they have the votes. But if the governor makes the call for the special session, I expect that means he’s been advised that he’s got the votes,” House Republican Whip Wilson Stone, of Scottsville, said on Friday. “He has not issued that call, so that might mean he’s not quite there yet.”

By Tom Loftus
The Courier-Journal