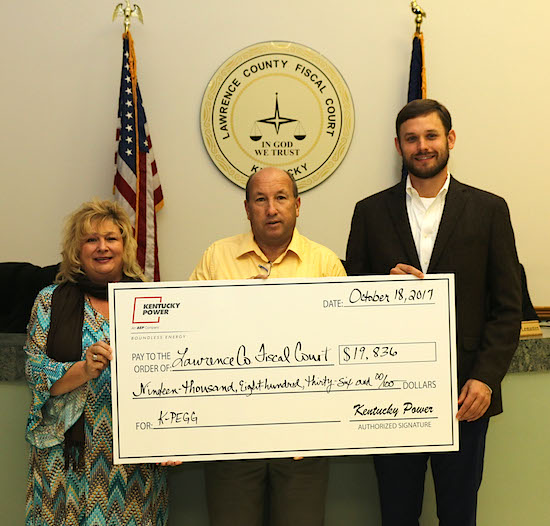 The grant is part of the Kentucky Power Economic Development Growth Grants (K-PEGG) program. K-PEGG grants are funded through the Kentucky Economic Development Surcharge. For every 15 cents collected monthly from customers, company stockholders match customer contributions dollar for dollar to generate more than $600,000 annually for investment at the local and regional levels.

Information is posted at kentuckypower.com/development/. Kentucky Power, based in Ashland, Kentucky, provides electric service to about 168,000 customers in eastern Kentucky counties. The program is available in all 20 counties served by Kentucky Power.

“Our K-PEGG grants support our communities as Kentucky Power leads the charge to revitalize eastern Kentucky through economic development,” said Kentucky Power President Matt Satterwhite. “We welcome the opportunity to work with local, state and regional leaders on this and future projects and will continue working to bring investment and jobs to eastern Kentucky.”

“Lawrence County is in desperate need of jobs with high-end wages to replace jobs lost due to the declining coal industry and to reduce the number of people who are moving out of the area for work. This industrial park is sure to attract a major company, and jobs with substantial salaries and benefits,” according to the application.

“We understand the need and the importance of an industrial park in Lawrence County,” said Lawrence County Judge Executive John Osborne. “We want to assist by providing a feasibility study for the project but do not have sufficient funds at this time.”

The grant allows Lawrence County to pay for a feasibility study to be conducted by Summit Engineering as well as legal advertisements. The proposed 85-acre site includes the location of the former Big Sandy Unit 2 cooling tower, which was demolished in 2016 after it was closed.

FISH AND WILDLIFE OFFICIAL SAYS 'END IS IN SIGHT' FOR EHD