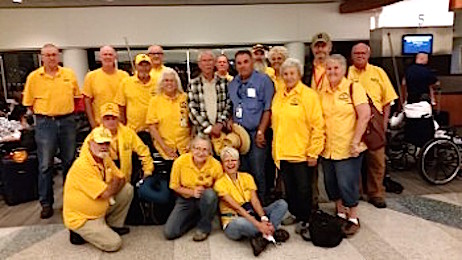 The disaster relief team of 13 males and six females, who will be serving through Oct. 29, are partnering with nine Southern Baptist churches in the Virgin Islands. They will be feeding those affected by the storms and doing chainsaw and flood clean-up.

“This is an extremely challenging deployment as the team is staying at Bluewater Bible College with no electricity, running water and phone service,” said Coy Webb, director of Kentucky Baptist Disaster Relief. “We are also battling difficulties getting resources on the island to support the team, such as a mobile kitchen and food supply containers,” he added.

Karen Smith, the “Blue Hat” (leader) of the Kentucky team, reported that the group was having difficulty communicating with the U.S. mainland. “Phone service is almost non-existent on island, and even texts are spotty,” she said.

Communications services and the power grid likely will be out for some time as the island’s infrastructure was destroyed.

Smith and two other Kentucky Baptists met with a Colonel for the National Guard, which is working to clear roads so food and supplies can reach people in need.

“Trees and poles down everywhere. Looks like a war zone,” Smith texted to Webb. The National Guard is open to allowing team to borrow a generator, but there is no diesel on the island, she said.
“Fuel is major issue on the island,” she added.

Team members hope to lead workshops in food safety and mass food preparation and chainsaw training for volunteers from local Baptist churches there, so disaster relief work can continue after the group returns to Kentucky.

Local churches have been asked to provide meals with disaster relief support to schools when they reopen, which is expected to be sometime this week. Food is desperately needed on island as supplies are very limited and many people lack resources to purchase food at this time, Smith reported.

Team leaders are praying that food containers and a Southern Baptist Disaster Relief kitchen from Alabama Baptists will arrive soon, so they can begin feeding people. “The team is ready to provide 2,000 meals per day, but needs food and cooking equipment,” Smith said. “We cannot stress enough that the need is urgent.”

This is not the first Kentucky DR team to serve outside the continental United States or on an international deployment. Volunteers have worked in Sub-Sahara Africa, Greece and Iraq, according to Webb. But this is proving to be one of the most challenging.

“It’s an extremely fluid response, but the team is offering help, healing and hope as they remind those on the island that God cares about them and they are not forgotten,” said Webb, who is unsure at this time if additional teams from Kentucky will be sent to St. Thomas.