Robinson Creek, Ky. —  For the seventh straight year Lawrence Co. Soccer has won a District championship.This time it was the 58th after defeating Pikeville 7-1 on Thursday night at Shelby Valley. 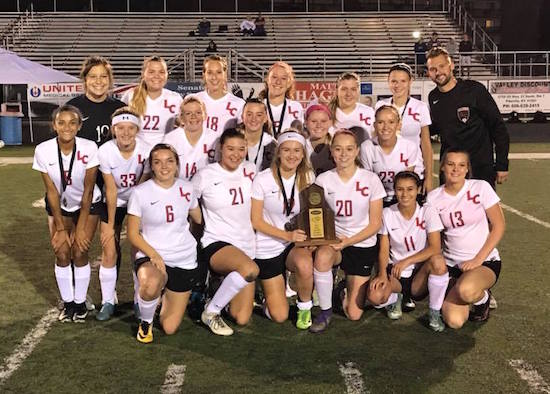 Maynard, Fletcher, Granillo, Ellie Webb and Sarah Lycans had one assist each.

With the win Lawrence Co. improves to 15-2-2 and will advance to the 15th Region Tournament next week and face Johnson Central on Tuesday night at 6:00. The two teams met a couple weeks ago in Louisa with the Golden Eagles winning 5-2.

Pikeville will face Prestonsburg in the other semifinal with the two winners playing for a 15th Region title on Thursday at 7:00.

In a semifinal game on Wednesday night it was all Lawrence Co. as the SoccerDawgs made quick work of the Wildcats to advance to the title game in shut out fashion.

Lycans, Clevenger, Fletcher, Jordan Stepp and Scyler Bowens all had one assist each.

The SoccerDawgs had five members of the 58th All District team as Zayla Granillo, Victor Clevenger, Hayleah Fletcher, Sarah Lycans and Kylie Maynard were chosen.

“… Girls did a great job of possessing the ball, just took us a little bit to settle in and create quality chances. its tough sometimes when you play a team like that, who just sits in and defends, takes some time to spread defense out and get chances to score. Overall, good night and did what we needed.”

“… Once again showed our dominance in district play. To win the title for the 7th year just shows how this program has built success at that level for multiple years. It’s always a good feeling, but now its about being consistent at the regional level. I told them to enjoy the win, but quickly focus on JC in the regional semifinal.”