Suspended University of Louisville basketball coach Rick Pitino told the Louisville Courier-Journal on Sunday that he was innocent and he thinks he “will be vindicated” in a federal investigation of alleged improper payments to college basketball recruits. 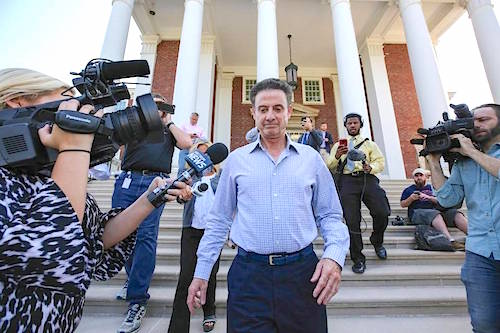 “Right now it’s in the lawyers’ hands,” Pitino told the newspaper. “I went to Miami. I’m selling my housing (in Louisville).”

On Wednesday, Pitino and U of L Athletics Director Tom Jurich were placed on administrative leave after the FBI unsealed a yearlong investigation.

Pitino also said it didn’t matter whether he was “Coach 2” in a federal criminal complaint unsealed Tuesday. The complaint says that Coach 2 called Adidas representative James Gatto on May 27 and June 1, the day the Louisville newspaper reported that Brian Bowen had enrolled at U of L. Pitino told the Courier-Journal that he wasn’t talking about Bowen during those phone calls. He said he was discussing former U of L player Terry Rozier’s sponsorship deal with Adidas.

Pitino said he had “zero to do with any of it, and I’ll be vindicated.”

During the 9 a.m. meeting, the board of trustees will also get an update on the Southern Association of Colleges and Schools. The accrediting agency placed the university on probation over numerous governance and financial issues. U of L interim president Greg Postel told a state legislative committee Thursday that he expected the university’s probation to be lifted at the SACS meeting in December.

As Kentucky’s second-largest university tries to right itself after years of financial and athletic scandals, it also is trying to recruit a new leader. The board of trustees agenda includes an update on the search for a president.

MORE DRUGS OFF OF OUR STREETS, WITH MORE LOCAL ARRESTS TO COME