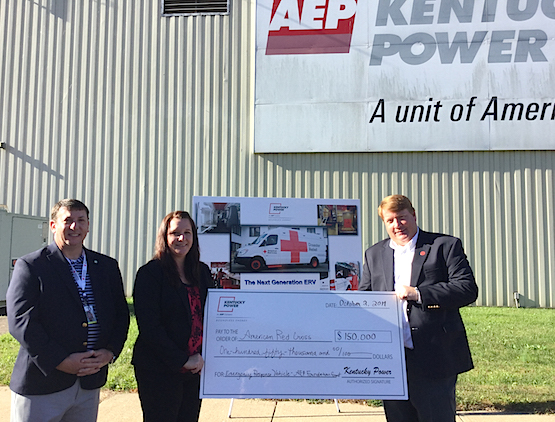 “Eastern Kentucky is no stranger to natural disasters like floods yet has never had its own dedicated Emergency Response Vehicle,” said Kentucky Power President Matt Satterwhite. “That changes now. This modern vehicle will help the Red Cross quickly respond in our communities during emergencies. The devastation resulting from the recent hurricanes and the flooding and power outages that followed show the value this vehicle will bring to our region and beyond.”

The Red Cross uses Emergency Response Vehicles with response, relief and recovery operations to provide food, water, personal hygiene kits, blankets, cots, volunteer help and other assistance to those in need. The new vehicle is a mobile feeding station capable of serving up to 25,000 meals to people affected by hurricanes, tornados, earthquakes, forest fires, blizzards, ice storms or other natural disasters.

“The Eastern Kentucky Chapter Emergency Response Vehicle is a tremendous asset to the Chapter, the Kentucky region, our neighbors in Southern Ohio and West Virginia, and the nation,” said Joanna King, executive director of the Eastern Kentucky Chapter of the American Red Cross. “We are incredibly grateful to Kentucky Power and the AEP Foundation. This gift is truly a game changer for the American Red Cross Disaster Relief, Response and Recovery in eastern Kentucky and will serve this area for 10 or more years to come.”

The grant announcement comes as the Red Cross is preparing for National Fire Prevention Week, October 8 to 14. Every year 2,500 people die in home fires, according to the Red Cross. Yet, having a working smoke detectors can reduce the risk of dying in a fire by nearly 50 percent. That is one reason Kentucky Power also is a supporter of the Red Cross’ Home Fire Preparedness Campaign in eastern Kentucky. Those in need can get a smoke detector by calling 606-325-1626.