INTERVIEW WITH U OF L’S NEW BASKETBALL COACH

The image of David Padgett sitting on Louisville basketball’s team plane in a wheelchair, his left leg kept straight as it recovered from arthroscopic knee surgery, has remained in Perrin Johnson’s mind for the past decade. 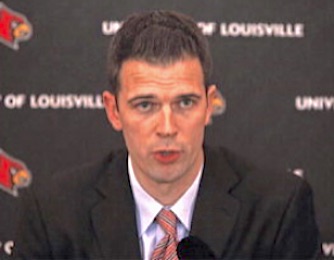 Louisville was returning from the 2006 Big East Tournament in New York, and Johnson, who played with Padgett, remembered thinking his teammate handled the situation with poise.

It’s the perfect illustration of Padgett as a person, Johnson said. And that demeanor could go a long way toward helping the 2017-18 Cardinals endure what could be the most trying season yet for a program that has spent the past few years deluged by off-the-court drama.

Padgett was named Louisville’s interim basketball coach on Friday, two days after Rick Pitino was put on unpaid administrative leave and “effectively fired,” according to his lawyer. An FBI investigation into college basketball recruiting has Louisville and several other topflight programs under scrutiny.

“He’s a natural-born leader,” Johnson said of Padgett, who played three seasons at Louisville after transferring from Kansas. “He’s never too high, never too low, which is why I thought he was a good fit. In a situation like this, being a new, young coach is difficult regardless, but he’s the perfect personality for the circumstances. He always lifted everybody up. He didn’t let anybody hang their heads.”

David Padgett, 32, grew up in Reno, Nevada, the son of Debra and Pete Padgett, a University of Nevada basketball legend who is that program’s all-time rebounding leader and seventh leading scorer. Pete Padgett’s dad, Jim, was his coach at Nevada. It made sense that Pete followed in his father’s footsteps, opting to start a coaching career after college instead of playing professional basketball, even after the Atlanta Hawks picked him in the 1976 NBA draft.

Pete has been a high school basketball coach in Nevada for the past 40 years, save one season on Bob Williams’ staff at the University of California Santa Barbara. He coached his 6foot-11-inch son at Reno High, where David was named the Nevada player of the year and became a McDonald’s All-American as a high school senior.

The younger Padgett first went to Kansas, where he played one season, averaging 6.5 points and 4.5 rebounds per game for Bill Self’s Jayhawks.

As Padgett referenced during his press conference Friday, he left Kansas after one year because of a coaching change. Self replaced Roy Williams, who recruited Padgett as a high schooler.

That’s how he ended up at Louisville, where he sat out the 2004-05 season and played three years for Pitino.

“You could tell right away that his character is immense,” said Kenny Klein, chief spokesman for the Louisville athletics department and its men’s basketball team. “It was evident from the start. When he got out on the court, he was terrific, and he was one of those go-to quote guys in the locker room.”

Bellarmine coach Scott Davenport, who was on Louisville’s coaching staff when Padgett arrived, said Padgett made an instant impression on his coaches and teammates.

Padgett played professionally in Spain for two years. But he was always on the path to become a coach, Johnson said.

“I thought David would play a little longer before he became a coach,” Johnson said. “But everybody has their calling. That was his.”
In 2014, Pitino added Padgett as the Cards’ director of basketball operations. He was so meticulous and effective at that job, Klein said, that Pitino didn’t want to move Padgett to another position. But Padgett deserved the promotion, Pitino said in 2016.

Former Louisville assistant Mike Balado, who is now the head coach at Arkansas State, said earlier this year that Padgett made a good coach because he’s “a great teacher of the game.”

“He articulates exactly what he wants and what he sees,” said Balado in late January when he was still on Lousiville’s coaching staff. “He’s done an excellent job with our big guys, teaching them and helping them understand when to pass, how to post up, just little things that (he did) when he played.”

That’s why senior Anas Mahmoud led the players’ charge this week to have Padgett named as U of L’s interim coach. Mahmoud, a 7-foot center, had his best season yet this past campaign, often crediting Padgett for helping him develop his post moves.

“He’s played in the system, coached in the system, and was known as both a coach on the floor and a point center when he played,” Snider said. “With them keeping the same system, the transition should be easy, and they already have the guys in place they need to make a nice run.”

Interim President Greg Postel said the university expects a resolution to its appeal of the NCAA infractions case involving Katina Powell’s allegations in January, which will provide some closure to the escort scandal that originally rocked the program in 2015.

But there could be a new NCAA infractions case after the recent revelations in the federal criminal complaint. Padgett said on Friday that he would not be named in any federal investigation, saying Postel wouldn’t have placed him in the interim position if there was any danger of that.

Now Padgett starts practices Sunday with as tough a task as any interim coach in recent memory.

“Obviously, before my first game, I’ll probably be throwing up back in the locker room,” Padgett joked Friday.

But, he added later, this season to him isn’t about his coaching career or taking the next step.

“When I got into this profession, my goal was to be a head coach,” Padgett said. “I certainly didn’t expect it to come this way, per se, but I’m not trying to prove myself to meet (Pitino’s) standards or to meet (former U of L coach Denny Crum’s) standards. I’m just trying to win as many games as we can for these kids.”

By Jeff Greer
The Courier-Journal