Rick Pitino has been fired as the head coach at Louisville, per a report from WAVE-TV’s Kent Taylor.

According to Jody Demling of CardinalAuthority.com, athletics director Tom Jurich has been fired as well. Demling said Jurich was asked to fire Pitino by Louisville president Greg Postel and refused. Postel then asked Jurich to resign, and Jurich refused — so he was fired. 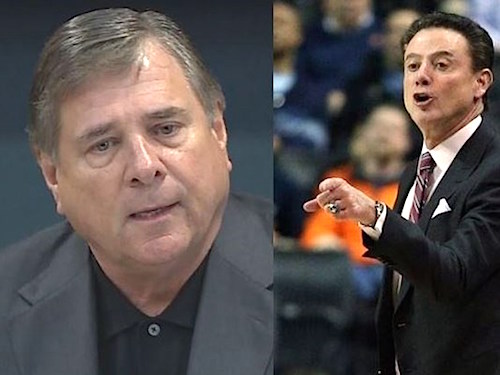 The Courier-Journal’s Jeff Greer spoke with Pitino’s attorney, who said that Pitino was placed on administrative leave, but “effectively fired.”

Louisville has scheduled a press conference for 1 p.m. ET. Neither Jurich, nor Pitino will be in attendance.

Most felt Pitino was living on borrowed time after it was announced that, as part of an FBI investigation into corruption and bribes in college basketball, school coaches allegedly discussed making payments to a top recruit with a now-arrested Adidas executive.

The only coach to lead three different schools to the Final Four and one of just four coaches to take a school to a Final Four in four different decades, Pitino’s teams won two NCAA Championships, doing so at rivals Kentucky (1996) and Louisville (2013). He finished his career at Louisville with a 461-141 record, a giant-sized chunk of his overall 770-269 mark.

Pitino surprised many by taking an upstart Providence team to the 1987 Final Four, doing so with grit and a team that bombed away from the outside. That led to the New York Knicks job — one of two NBA head coaching jobs he held in his career — and eventually an invitation back to try and rebuild Kentucky while the program was on NCAA probation from previous coach Eddie Sutton. It didn’t take long for Pitino to get the Wildcats back. In 1992, the Wildcats were a miracle Christian Laettner shot from the Final Four and a shot at the title, and the Wildcats made it to college basketball’s semifinals the following year. His 1996 National Championship team is considered one of Kentucky’s best ever, while his 1997 team made it to the final only to fall to Arizona. In 1998, with Tubby Smith coaching a team largely constructed by Pitino, Kentucky made it back to the title game to win yet again.

Pitino, meanwhile, was giving the NBA his second shot with the Boston Celtics. By 2001, he was back in college, and in Kentucky, this time with the Wildcats’ hated rival, Louisville. And Pitino excelled there as well, making three Final Fours — including the Cardinals’ first in 19 years — and winning the 2013 National Championship.

On the court, Pitino was a no-doubt Hall of Famer, and he was elected to the Naismith Memorial Hall of Fame in 2013. But off it, he often found himself surrounded by controversy. The most recent of those controversies included a scandal that a former Louisville assistant provided strippers and sex parties for Louisville players and recruits, one that some felt could lead to the NCAA vacating Louisville’s 2013 title.

And then came Tuesday, and with it recorded conversations of Louisville coaches discussing Adidas — the shoe company that sponsors Louisville — making payments to top recruit Brian “Tugs” Bowen to get him to join the Cardinals team. He did, and enrolled there this summer.