BIG PLAYS SPELL THE END FOR THE REBELS VS TUG VALLEY

Blankenship scored on a one yard QB sneak, caught a 65 yard touchdown pass from Nathan Muscat, returned a punt 65 yards for a touchdown and scored from 71 yards out on a broken play.

Tolsia got on the board first when Brent Setzer recovered a fumble for a touchdown and Eric Williams tacked on the PAT for a 7-0 lead in the first quarter. Wayne Williamson scored from 15 yards out to cap off a 13 play drive to give the Rebels a 13-6 lead.

After Tug Valley took a 14-13 lead one play later the Rebels were stopped at the one yard line as time expired in the first half to trail the Panthers 14-13 at Half.

In the second half Tolsia got the ball inside the 10 yard line on two separate drives but both ended without points. 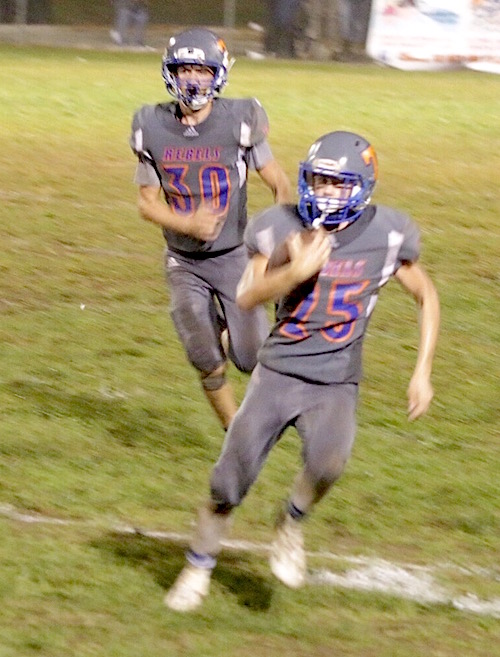 The Rebels got within 30-21 on a Williamson 2 yard keeper and a Jonathon Johnson 2 point conversion with 8:52 to go. The Panthers put the game away when Caleb May intercepted Williamson in the Rebel end zone and galloped 102 yards for a touchdown to ice the victory.

Williamson completed passes to Jared Switzer, Johnson, and Austin Guaze on the night.

Tolsia will make the three hour trip to Lost Creek to take on #3 South Harrison ( 4-0 ) next Friday night. Tug Valley will host Buffalo.

“… Missed opportunities has been the story of our season so far. We had the ball inside the 10 yard line three different times and came away empty. We are not good enough to overcome that.”

“… Blankenship is a nice player and made big play after big play on us. We will get back to work this week because it doesn’t get any easier with a long trip ahead of us.”

MEADE HAS A BRIGHT FUTURE WITH CDL, LINEMAN AND FIBER OPTIC TRAINING