LOUISA – At the Lawrence County Board of Education meeting at Fallsburg School on Monday evening, members of the board and the audience had the pleasure of hearing about progress and the sobering news about pending state level budget cuts. 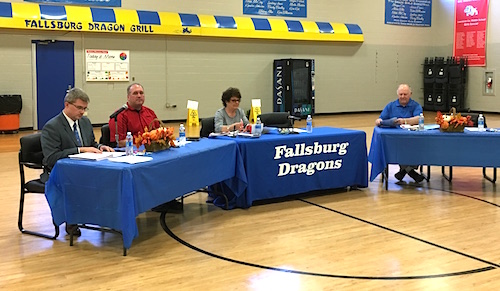 But they didn’t hear about the Board taking an annual four percent tax raise on residents.

The members of the board (minus Maddlene Roberts, who was out with an illness) opted instead to follow the recommendation of Superintendent Dr. Robbie Fletcher and Board Chair Heath Preston to accept the compensating rate, which will keep operating budgets stable for the next fiscal year.

They also heard students Waylon Burgess and William Copley thank board members and Dr. Fletcher for a new flag pole display at Fallsburg as well as student Ryan Marcum offering thanks for the new floor in the gymnasium.

Teachers Penny Preece and Missy Edens updated the Board on the implementation of PACE (purpose/accountability/congruity/eyes on text-engagement). Dr. Fletcher elaborated about the PACE implementation, stating that it was an effort to move the center of learning responsibility more to the student.

Director of Special Education and Early Learning Rhonda Colvin shared that Lawrence County Schools’ pre-school programs received a 5 star rating out of a possible 5 stars from the Kentucky All Stars program in recognition of outstanding instruction and care for pre-school/early learning students.

Dr. Fletcher then brought the difficult news of announced pending budget cuts from the state department of education due to an announcement out of the governor’s office of a pending 17.4% cut in the budgets of all state programs. He outlined possible spending reductions to address this and the fact that the commissioner has pledged to try and absorb the impact of such a cut at the state level as much as possible.

Fletcher also apprised members of the discussions in the legislature regarding the reformation of the teacher retirement system and its potential impact on our district.

Dr. Fletcher was also appointed chair of the Kentucky Valley Education Cooperative and stated that he would be attending KVEC meetings, and he was able to praise Lawrence County High School for transition from advisory council status back to site based decision making council status because of consistent performance on academic standards.

Dr. Fletcher expressed thanks to Sabrina Fyffe and Kay Ison, the FES school secretary and a retired FES teacher, for beautifying the Fallsburg building with carefully placed, hand painted quotes for inspiration and motivation of students, staff, and visitors. Principal Sara Bowen said it was solely Mrs. Fyffe’s and Mrs. Ison’s doing,

“They let me know what they’re going to do and come in after hours and just do it and it looks great.”

The Board got updates on the work of the staff focusing on Drug Awareness and Prevention curriculum, as well as a visit to Lawrence County Schools by newly inaugurated Morehead State University President Dr. Jay Morgan.

The Board appointed Mr. Jim See as the Board representative for the Local Facilities Planning Committee. After this appointment, the Board approved the names of the 20-member committee for submission to the Kentucky Department of Education.